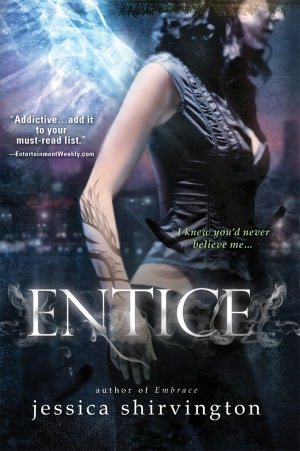 Entice by Jessica Shirvington follows Embrace which I read at the beginning of the year and just loved (my review). Well I really loved this one as well. You know how it is when you get hooked on a series and you anxiously await that next installment… well, it’s even better when it turns out to be just as good as the first one or maybe even better. I only say better because I think since I was already familiar with the characters and the storyline I ended up being sucked in even faster. Do I think this book can stand alone? Yes you could probably read it without having read Embrace but I think you would get so much more out of the story by having the history of the characters and the beginning of the story that takes place in Embrace. Either way this series is fantastic and I’m hooked – there are two more books to come and I can’t wait to see what happens next!

Entice jumps right in where Embrace left off only Violet (I’m only going to give a brief summary of the story to prevent spoilers), now more familiar with being Grigori, is stronger and more prepared, and yet there is so much more for her to learn. In Embrace she suffered greatly at the hands of an evil one and she can feel evil on it’s way more than ever. Lincoln, the guy she fell for hard until she learned that Grigori partners aren’t allowed to be together, is still as awesome as ever. Quite often I find the male characters to be so full of themselves but Lincoln isn’t – he’s just a good guy. The thing is these two still have such an attraction to each other. It kills Violet to know she can’t ever be with him especially with Magda hanging around… or is there maybe a way they can have a relationship and be together completely…

Violet is a great character; she’s spunky and funny and you get completely drawn into her world – the same with Lincoln; you just like him right off the bat. The thing I really enjoyed about Entice though was the whole host of new characters that was introduced. Violet needs much more training of course but refuses to go the Academy so some of them have to come to her. Enter Zoe, Salvatore, and Spence along with teachers Nyla and Rudyard. What great characters – all of them! I have to admit to my favorite being Spence who wants only to see action and figures the best place to find that is by staying right by Violet’s side. He was quite funny and I really hope to see a lot more of him to come in future books.

Entice is another great addition to this series and I’m looking forward to seeing what they all encounter in the next book. It’s full of action, adventure, and suspense! If you’re a fan of The Moral Instruments series by Cassandra Clare then this is a series you’ll want to pick up and lose yourself in!

Source:  Review copy provided by Sourcebooks via NetGalley.  No compensation was received and all thoughts and opinions are my own.