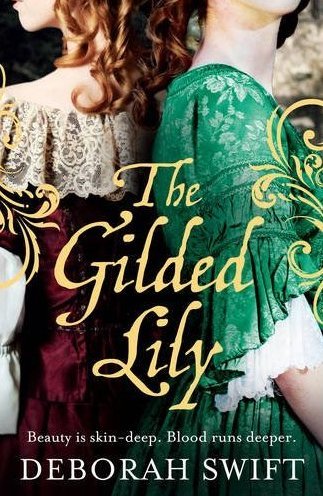 The Gilded Lily by Deborah Swift, set in London, is a novel of sisters; it is also one of betrayal and greed.  The Gilded Lily is a companion book to The Lady’s Slipper which I haven’t read but this novel stands on it’s own quite well.  That’s not to say that I don’t intend to read The Lady’s Slipper right smartly though – it’s not often I pick up an author’s first book right after reading the current one but this time I intend to.  I enjoyed it that much!  You don’t always need your historical fiction full of facts and a history lesson.  Sometimes it’s nice to just sit back and relax and be taken on a historical adventure instead and that’s exactly what you’ll get with The Gilded Lily.

The year is 1660 and Ella and Sadie are sisters who haven’t had the easiest of lives so far living with their drunk of a father who doesn’t hesitate to beat on them at every opportunity.  Ella, who is working as a housemaid, knows she deserves  better in her life and she has every intention of getting it.  Sadie though is a quieter girl who has always looked up to her more beautiful sister as Sadie has a blood red birthmark on her cheek that has singled her out as being most likely evil – remember the year is 1660, and Ella has always protected her.  So when Ella shows up one night and tells Sadie to come along with her Sadie doesn’t hesitate.  However when she realizes that Ella’s employer is dead and they are stealing his belongings she is more than a little mortified.  Nevertheless she helps Ella and they leave for London.  Ella loves the hustle and bustle of London but Sadie is a country girl and London is more than a little scary to her.

Jobs aren’t easy to come by but finally they get work making ladies wigs but it isn’t long before Ella gets herself fired.  Lucky for her she gets hired by a rich gentleman named Jay Whitgift who is the son of a wealthy pawnbroker in London to work in The Gilded Lily, a shop full of perfumes, powders, and skin treatments for women.  Ella is quickly drawn into the world of beautiful gowns and rich people but trouble is on the horizon.  Ella’s employer had a twin brother who refuses to give up on hunting the girls down and he’s in London putting up posters of them everywhere.  For Ella it isn’t as big a deal but it’s impossible to hide Sadie with that birthmark so she resorts to locking her in their rooms instead.  Soon enough though Ella learns that this world of glitz and glamor isn’t all she thought it was going to be and instead she and Sadie find themselves fighting for their lives.

The Gilded Lily had me hooked from the first chapter – even the first page.  I love a book like that – a book that is almost 500 pages but seemed so much less because I wanted more every time I had to put it down.  Sadie was a character that just grabbed your heart from the beginning.  With her birthmark marring her life so far, she had never really realized or thought that she deserved so much more.  She was a loving and loyal sister and friend and I really liked her.  Ella on the other hand I wanted to slap more than a few times for her stupidity and how she treated her sister and yet I didn’t dislike her; I just thought she was misguided and easily led in the wrong direction because of greed.  In the end this is a story of sisters and the lengths they will go to in order to ultimately protect each other.  I loved it!

The Gilded Lily by Deborah Swift is on tour with Historical Fiction Virtual Book Tours so be sure to stop in and follow along with the other tour stops and you can also find Deborah on her website.  As a note this tour is to celebrate the UK release of The Gilded Lily – it will not be available in the US or Canada until November but the good news is that you do have a chance to win a copy for yourself in my giveaway below!  You can also pre-order The Gilded Lily here in the US and here in Canada.

I have one copy of The Gilded Lily by Deborah Swift up for giveaway to my readers and best of all it’s open internationally.  To enter…

This giveaway is open internationally to all!  I will draw for the winner on Saturday, September 29/12.  Good luck!

Source: Review copy provided by Historical Fiction Virtual Book Tours and the Publisher. No compensation was received and all thoughts and opinions are my own.
Share this post!