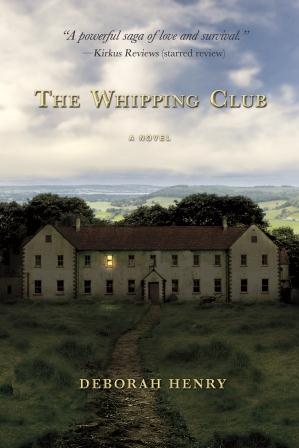 The Whipping Club by Deborah Henry is one of those novels that will draw you into a world of secrets and the effect that they carry throughout the lives of those who kept them. It is quite an emotional book and not always easy to read but in saying that I also have to say that it’s a book I enjoyed. It’s a story of marriage, family, secrets, and the lengths we will go to in order to protect those we love.

The year is 1957 in Ireland and a marriage between a boy of Jewish faith and a girl of Catholic faith is not one that would be looked upon favorably and yet Marian and Ben are in love and want to be married. When Ben attempts to introduce Marian to his mother things don’t go well and Marian leaves upset and with a huge secret. A secret that she decides to keep; she’s pregnant with Ben’s child and has decided on her own to give it up for adoption. Marian is led to believe that her child has been adopted by an American family and has a good life which she feels is best for him at that time. Years later she and Brian are married with their own daughter Johanna and yet Marian has never forgotten the son she gave away. Things completely come crashing down when she learns, in fact, that Adrian never went to a good American family. Instead he’s been in an orphanage not even an hour away from her family and has not had a good life at all. She is devastated.

Once Marian learns of her son’s unhappy existence she becomes consumed with getting him back. She finally tells her husband what happened all those years ago only to learn that Ben had been keeping secrets of his own. She feels betrayed and angry and even angrier at herself for not fighting hard enough to keep him all those years ago. Unfortunately Marian and Ben are unable to get custody of their own biological son – he is the legal guardian of one of the nuns and she has no intention of letting him go but does let him stay with the family for the summer. Although it appears that Adrian has quite a few issues from his childhood he still takes his place within the family and they love and want him. However it doesn’t seem as though it’s meant to be and Adrian goes back to the nuns. From there things take an even worse toll on Adrian and the family and while it seems it should be easy enough to get your biological son back it turns into nothing but a nightmare for this family and especially Adrian.

The story of Adrian and his time in the orphanage and later a boy’s home is a gut wrenching tale and not easy to read. We always hear stories of religious people who take advantage of their positions to harm innocent children and that’s the part of this story that is hard to take. My heart literally broke for Adrian who was never really given a chance in life. I felt for Marian as well. It’s easy enough to pass judgment and say you’d never give up your child but things were very different back in the 1950’s than now and single pregnant girls didn’t have an easy time of it, especially good Catholic girls. What does shine through in this novel is the love of a mother and the determination and drive to finally do what’s best for her family.

The Whipping Club by Deborah Henry is touring with TLC Book Tours so be sure to check out the other tour stops as well. Deborah can be found on her website, Facebook, and Twitter. Your own copy of The Whipping Club can be purchased here in the US and here in Canada.

Source: Review copy provided by TLC Book Tours and the Publisher via NetGalley. No compensation was received and all thoughts and opinions are my own.