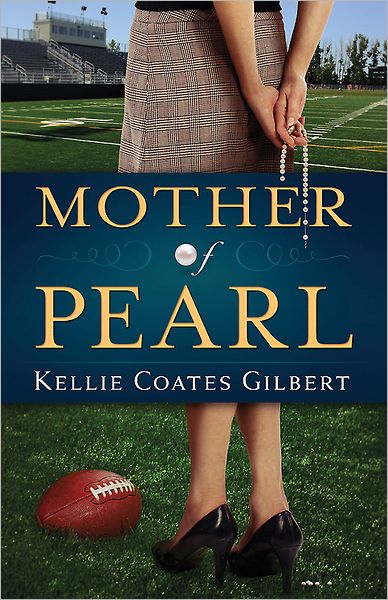 Kellie Coates Gilbert is a new author to me but I can guarantee that her debut novel Mother of Pearl won’t be the last of her work that I will read.  Mother of Pearl is an emotionally wrenching story that will leave you feeling as if you have lived in the pages of this book while reading it.  It is a story of a family, a tragedy, and, in the end, it will leave you asking yourself just how far you would go to protect your child.

Barrie seems to have it all.  She has a loving husband, a son and daughter, and a great job that she loves as a school counselor.  While driving home from a football game with her daughter Pearl they see Pearl’s boyfriend kissing another girl and not just any girl – it’s Pearl’s best friend.  Life rapidly begins to unravel for the family as Pearl withdraws from everyone and refuses to discuss anything with her mother.  Barrie had always thought she had a pretty good handle on who her daughter was and how she felt about things – she had thought they had the kind of relationship where they could share things.  She is shocked when Pearl begins sneaking out of the house at night, going to parties, and coming home drunk.  However, nothing in the world can prepare Barrie for the tragedy that is in store or for the justice that she will fight tooth and nail for in order to protect her daughter’s reputation even if it means jeopardizing her relationships with her husband and son.

This is a novel where you can’t talk much about the plot because it gives away too much of the story so I’ll leave it there and discuss the characters a bit.  Barrie is the type of character that immediately pulls you into her world. She’s a mother, first and foremost, who loves her children and will do anything in her power and more to protect them.  She’s passionate about her job and being able to shape the young people’s lives that she counsels.  She’s far from perfect though – she’s not the best cook or housekeeper and struggles to get supper on the table but that’s what makes her so likeable.  She’s easy to relate to because she sounds just like so many woman you and I already know.  Her husband Steve was likable as well but there were more than a few instances in the novel where I thought he could have been more understanding but then those are the complications of any marriage.  There are also side characters like Barrie’s mother who, in the beginning of the novel I really didn’t like at all, but by the end of the story I had warmed up to considerably.  Then there is a Jackie who is one of those ultimate perfect homemakers who can bake, cook, and do just about everything perfectly.  At first Barrie is disgusted by her perfection but as time wears on and Jackie stands by her side Barrie realizes there is so much more to this woman.  Ultimately this novel is full of characters that I’m sure most of us will be able to relate to in one way or another.

Mother of Pearl is classed as Christian Fiction but it is not overwhelmingly so.  What it really shows is a woman who questions faith and God and why God would allow bad things to happen.  She can’t understand how her husband can turn to God and have it help him and she envies her young son’s ability to also place his faith in God’s healing hands.  Slowly though she awakens to the idea that there is a greater power out there than herself to believe in and her journey to having faith in God begins.  I have to say that this novel will break your heart so having a box of tissues nearby is a good idea.  It will also leave you feeling hopeful in the fact that even in the worst of times there is hope around the corner… 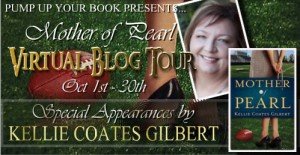 Mother of Pearl is touring with Pump Up Your Book so be sure to check out the other tour stops along the way.  You can find Kellie Coates Gilbert at her website as well as Facebook and Twitter.  You can purchase your own copy of Mother of Pearl here in the US and here in Canada.

I have one copy of Mother of Pearl by Kellie Coates Gilbert to share with my readers.  To enter…

This giveaway is open to US and Canadian residents (no PO boxes) and I will draw for the winner on Saturday, October 27/12.  Good luck!

Source:  Review copy provided by Pump Up Your Book and the Publisher via NetGalley.  No compensation was received and all thoughts and opinions are my own.