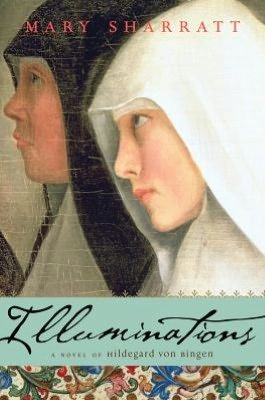 Please help me to welcome author Mary Sharratt, author of Illuminations, to Peeking Between the Pages today.  I reviewed Mary’s newest book Illuminations yesterday (my review) and it was another fantastic novel written by one of my favorite authors.  Today Mary joins us with a great guest post entitled The Triumph of Hildegard von Bingen…

Born in the lush green Rhineland in present day Germany, Hildegard (1098–1179) was a Benedictine abbess and polymath. She founded two monastic communities for women, composed an entire corpus of sacred music, and wrote nine books on subjects as diverse as theology, cosmology, botany, medicine, linguistics, and human sexuality, a prodigious intellectual outpouring that was unprecedented for a 12th-century woman. Her prophecies earned her the title Sybil of the Rhine.

An outspoken critic of ecclesiastical corruption, she courted controversy. Though women were forbidden to preach, Hildegard embarked on four preaching tours in which she delivered apocalyptic sermons warning her male superiors in the Church that they must reform their dissolute ways or suffer divine wrath. Late in her life, she and her nuns were the subject of an interdict (a collective excommunication) that was lifted only a few months before her death. Hildegard nearly died an outcast, her fate hauntingly similar to that of the contemporary sisters and nuns of the Leadership Council of Women Religious as they face the current Vatican crackdown.

873 years after her death, Hildegard will finally receive the highest recognition for her considerable achievements. On May 10, 2012, Pope Benedict XVI canonized Hildegard. In October 2012, she will be elevated to Doctor of the Church, a rare and solemn title reserved for theologians who have significantly impacted Church doctrine. Presently there are only thirty-three Doctors of the Church, and only three are women (Catherine of Siena, Teresa of Ávila, and Thérèse of Lisieux).

For twelve years I lived in Germany where Hildegard has long been enshrined as a cultural icon, admired by both secular and spiritual people. In her homeland, Hildegard’s cult as a “popular” saint long predated her official canonization.

As a writer, I was particularly struck by the pathos of her story. The youngest of ten children, Hildegard was offered to the Church at the age of eight. She reported having luminous visions since earliest childhood, so perhaps her parents didn’t know what else to do with her.

According to Guibert of Gembloux’s Vita Sanctae Hildegardis, she was bricked into an anchorage with her mentor, the fourteen-year-old Jutta von Sponheim, and possibly one other young girl. Guibert describes the anchorage in the bleakest terms, using words
like “mausoleum” and “prison,” and writes how these girls died to the world to be buried with Christ. As an adult, Hildegard strongly condemned the practice of offering child oblates to monastic life, but as a child she had absolutely no say in the matter. The anchorage was situated in Disibodenberg, a community of monks. What must it have been like to be among a tiny minority of young girls surrounded by adult men?

Disibodenberg Monastery is now in ruins and it’s impossible to say precisely where the anchorage was, but the suggested location is two suffocatingly narrow rooms built on to the back of the church.

Hildegard spent thirty years interred in her prison, her release only coming with Jutta’s death. What amazed me was how she was able to liberate herself and her sisters from such appalling conditions. At the age of forty-two, she underwent a dramatic transformation,
from a life of silence and submission to answering the divine call to speak and write about her visions she had kept secret all those years.

In the 12th century, it was a radical thing for a nun to set quill to paper and write about weighty theological matters. Her abbot panicked and had her examined for heresy. Yet miraculously this “poor weak figure of a woman,” as Hildegard called herself, triumphed against all odds to become the greatest voice of her age.

Mary Sharratt’s Illuminations: A Novel of Hildegard von Bingen is published in October by Houghton Mifflin Harcourt and is a Book of the Month and One Spirit Book Club pick. Visit Mary’s website: www.marysharratt.com

Hildegard of Bingen (1098-1179), Benedictine abbess and polymath, composed an entire corpus of sacred music and wrote nine books on subjects as diverse as theology, natural science, medicine, and human sexuality—a prodigious intellectual outpouring that put many of her male contemporaries to shame. Her prophecies earned her the title Sibyl of the Rhine. An outspoken critic of political and ecclesiastical corruption, she courted controversy and nearly died an excommunicant. Her courage and originality of thought continue to inspire people today.

Illuminations: A Novel of Hildegard von Bingen reveals the unforgettable story of how Hildegard, offered as a tithe to the Church at the age of eight, triumphed against impossible odds to become the greatest woman of her age. Combining fiction, history, and Hildegardian philosophy, Illuminations presents an arresting portrait of a woman of faith and power—a visionary in every sense of the word.

Illuminations will be released in October 2012 to celebrate Hildegard’s long awaited elevation to Doctor of the Church. 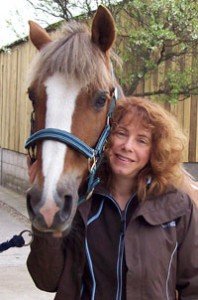 Mary Sharratt is an American writer who lives with her Belgian husband in the Pendle region of Lancashire, England, the setting for her acclaimed 2010 novel, Daughters of the Witching Hill, which recasts the Pendle Witches of 1612 in their historical context as cunning folk and healers.

Previously she lived for twelve years in Germany. This, along with her interest in sacred music and herbal medicine, inspired her to write her most recent novel, Illuminations: A Novel of Hildegard von Bingen, which explores the dramatic life of the 12th century Benedictine abbess, composer, polymath, and powerfrau.

Mary writes regular articles for Historical Novels Review and Solander on the theme of writing women back into history. When she isn’t writing, she’s usually riding her spirited Welsh mare through the Lancashire countryside.

I have one copy of Illuminations by Mary Sharratt to share with my readers.  To enter…

This giveaway is open to US and Canadian residents only (no PO boxes) and I will draw for the winner on Saturday, November 17/12.  Good luck!