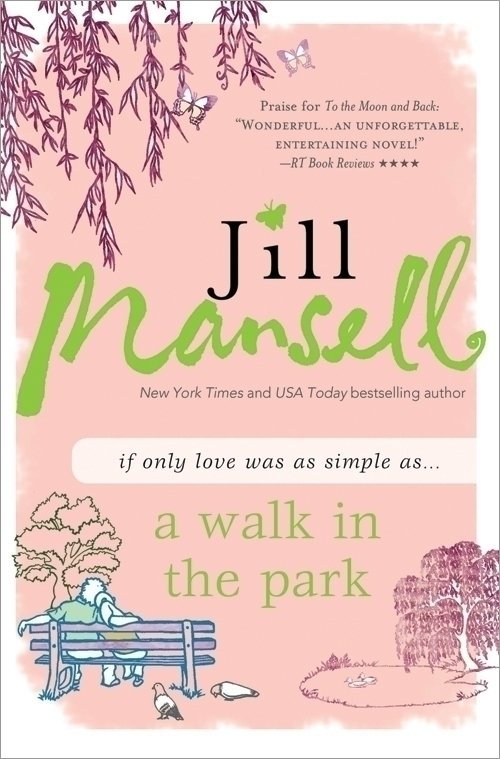 A Walk in the Park by Jill Mansell is yet another fantastic novel by this author!  I’ve enjoyed many of Jill’s novels in the past few years and each one of them is such a wonderful escape from the real world and what I like best is they always leave me feeling happy.  What I’ve noticed most is her ability to draw the reader so fully into her character’s lives that you feel as though they are part of your life by the time you’ve turned the last page.  A Walk in the Park is no different – I was pulled into this story from the very first chapter and hesitated to put it down until I reached the end.  As it seems I say with every Jill Mansell novel – I loved it!

Lara left home at sixteen, having been thrown out by her father and stepmother.  She returns home years later when her father dies although there is definitely no love lost there but apparently there is something for her in the will.  It turns out to be the house she grew up in and before you think that her father was being kind to her – he wasn’t.  The house was never really his, it was Lara’s mother’s house.  So Lara decides to move herself and her daughter Gigi into the house and although she doesn’t originally plan on having her old best friend Evie live with them, she moves in as well when she finds out on her wedding day that her fiance has been cheating on her for ages.  Oh and let’s not forget Flynn who was Lara’s teenage love.  Well he hasn’t changed much at all; he can still set her heart pitter-pattering in an instant but there can never be anything between them especially after Flynn learns that he is Gigi’s father.  Oh boy, that should definitely set off some fire works and not the romantic kind.  Hmmmmm, or will it?

What really makes this story sweet and enjoyable are all the characters and even though there are a few to keep track of it never seems a burden.  My favorites though were Lara and her daughter Gigi.  Lara has been a single mom and she feels she’s done a right good job even though she never saw fit to let Flynn know about his own child and he sure doesn’t seem to want to let her forget that either.  That aside though she is bound and determined not to let anything romantic happen between her and Flynn for Gigi’s sake because it should be all about Gigi now.  In avoiding romance she manages to get herself in a few pretty funny happenings.  And Gigi – well she’s hilarious.  She takes spunky to a whole new level and almost everything she said made me giggle.  She’s young, carefree, and doesn’t hesitate to tell it like it is.  Gigi and her mom make a great mother/daughter team but do they have room for one more?

A Walk in the Park is a light and fun read and one I enjoyed immensely.  I adore British fiction and Jill Mansell tops my list of British writers.  I love her writing style and how her characters and stories are always so much fun.  If you’re looking to just relax and get away for a bit with a story that will brighten your day then give A Walk in the Park a read – you won’t regret it!

Please pop by tomorrow as Jill Mansell will be visiting the blog with a guest post and I’ll be giving away a copy of A Walk in the Park as well – what could be better than a chance to read this great story for yourself!

Source: Review copy provided by Sourcebooks via NetGalley. No compensation was received for this review and all thoughts and opinions are my own.