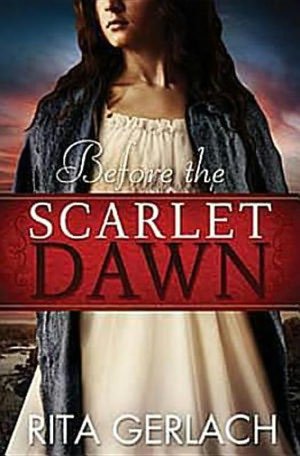 Before the Scarlet Dawn: Daughters of the Potomac Book 1 by Rita Gerlach is a book I picked up because I am on tour for the second book, Beside Two Rivers, later in the week and I thought it would be best to start at the beginning. Well I can’t begin to tell you all how glad I am that I decided to do that because I can say without a doubt that this will be a favorite series of mine. This is a Christian based fiction series that brings to the forefront love and faith and I fell for this book from the very first page.

Eliza lives in England with her father who is the vicar. Unfortunately he is very ill and passes away leaving her alone save for her serving woman and friend, Fiona. Even before her father passed on Eliza had been turning down marriage proposals from a wealthy man in her village. Eliza can not marry without love no matter how dire her circumstances. But then the wealthy Hayward returns home from the Colonies to find himself a wife and Eliza has fancied him since she was a young girl. Although Hayward has no intention of marrying Eliza she sets her sights on him. When Hayward’s plan to marry a more suitable lady is thwarted and Eliza makes it quite clear that she has no issue with going to live in the wilds of America he eventually agrees to take her as his wife.

While Hayward doesn’t fancy himself in love with Eliza he does admire her spunkiness and the fact that she isn’t one of those wishy-washy women. While the colonial life is hard Eliza still loves living in Maryland until Hayward leaves to fight in the Revolution. She is left alone to raise their daughter and deal with the harshness of the conditions of life in the wilderness especially as a woman on her own. Eliza faces many challenges along the way and when tragedy strikes her life more than once she finds her faith tested in the most challenging ways. Yet she believes that with God all things are possible and she holds onto that with all her might through her darkest times.

This novel is filled with many characters and more than a few really stand out in both good and bad ways. Eliza is one of my favorites because even though she has to obey her husband in all things (this is the 1700’s), she is still a strong and determined woman who speaks her mind and holds her faith above all else. Her serving woman Fiona is wonderful as well being so completely loyal to Eliza – she reminds me of a grandmotherly type. Hayward, of course, I wanted to bop in the nose more than once and needless to say he was not a favorite of mine for many reasons.

Before the Scarlet Dawn is an emotional novel of the struggles of early American life. It is a wonderfully descriptive novel that made me feel as though I was there and experiencing the hardships of life in a time that I have no idea of. I also loved the tone of faith and belief in God that is woven throughout the novel. There is most definitely not a dull moment in this book and I found myself turning the pages quickly as it twisted and turned in directions I was not prepared for. If you love Christian fiction as I do, I fully recommend Before the Scarlet Dawn. I am finishing up the second book in the series, Beside Two Rivers, and I am just as immersed in it as I was in Before the Scarlet Dawn. What a wonderful series!

Source: My own personal copy.