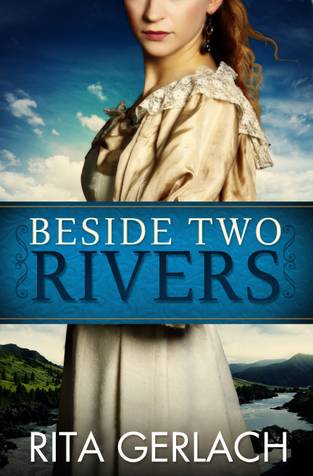 Beside Two Rivers by Rita Gerlach is the second book in The Daughters of the Potomac series, the first being Before the Scarlet Dawn which I reviewed yesterday (my review).  This is a fantastic Christian series and I really enjoyed the second book as well as it took me again from America to England and back to America again.  As with the first book, Beside Two Rivers also pulled me into the story immediately and held me there on another emotional and hopeful journey.

Beside Two Rivers centers around Darcy, Eliza and Hayward’s daughter.  Darcy believes her mother is dead and her father disappeared years ago.  He left her with his half-brother and she’s grown up healthy and happy with her uncle, aunt, and cousins in America.  Although Darcy barely remembers either of her parents she carries many of their traits especially her mother’s adventurous spirit.  Darcy loves life and wants to experience all she can to the point where sometimes she jeopardizes her own safety and scares the dickens out of her aunt.  On a beautiful summer day at a party being held at Twin Oaks Darcy meets Ethan, a man who takes her breath away, but he is also there from England and with a woman who he apparently has an arrangement with to marry.  She loves him and believes he loves her as well until the day she receives a letter from him telling her there can never be anything between them and that he is returning to England.

Darcy is saddened but not one to be held down for long and when a letter arrives from England from her grandmother who she’s never met asking her to come and live with her for a while Darcy jumps at the offer.  Needless to say it’s a long journey from America to England but meeting her grandmother turns out to be a wonderful experience for them both.  But Darcy is also there to try to learn more about her father and mother if she can as there is so much she doesn’t know about them.  The days seem to go by pleasantly enough but nothing prepares her or her heart for meeting Ethan again.  Will their love finally blossom into more?  Or are there too many outside forces at work to keep them apart? Soon enough Darcy is faced with events that have the power to change her life forever.

Rita Gerlach can really write characters that manage to enmesh themselves into your life and make you care about them.  It was great to read about Darcy all grown up and to see how, despite all that had happened to her already, she still has a strong faith in God and his plan for her.  There were many characters from the first novel that were brought back into this story like Eliza and Fiona and while their parts weren’t huge it was still nice to revisit them.  I have really enjoyed both books, Before the Scarlet Dawn and now Beside Two Rivers, a great deal.  I am very excited that there is a third book in the series, Beyond the Valley, that will be releasing in February of 2013 and oh yes, I will most definitely be reading it! 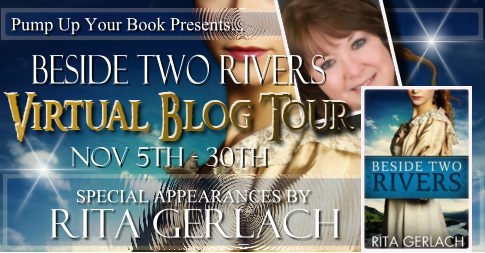 Beside Two Rivers by Rita Gerlach is on tour with Pump Up Your Book.  Be sure to check out all the other tour stops to see what others think of the book as well.  You can connect with Rita on her blog or Facebook and your own copy of Beside Two Rivers can be purchased here in the US and here in Canada.

Source: Review copy provided by Pump Up Your Book. and the Publisher via NetGalley. No compensation was received for this review and all thoughts are my own.