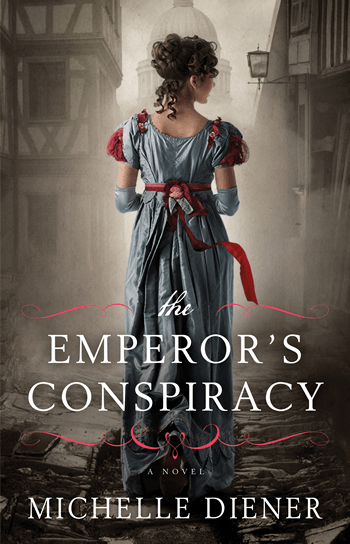 The Emperor’s Conspiracy by Michelle Diener which releases tomorrow is a fantastic novel! With a great mix of mystery and historical fiction it certainly kept me reading and anxious to learn more with all the twists and turns it took.  Taking place in nineteenth century London with a host of intriguing characters and plot The Emperor’s Conspiracy makes my list of books worth reading!

Charlotte Raven is a proper lady but she hasn’t always been so.  As a young child she was Charlie and a chimney sweep.  As luck would have it she got stuck in the chimney of Catherine Howe and while her employer deserted her, Catherine did not.  She took Charlotte in as her ward and gave her a life.  Many years later Charlotte is still living with Catherine going to balls and such and yet Charlotte leads two lives – one of a proper woman in society and one of a woman who still has strong ties to the streets and people she came from.

As a young girl Charlotte was saved on the streets by Luke Bracken who is now the top crime boss in London.  Luke has always loved Charlotte and has consistently tried to lure her away from Catherine Howe but while Charlotte loves Luke like a brother she is not in love with him as a man.  Now this poses a big problem because Luke has a lot of power on the street and loves to use it especially on any man who might show even the tiniest interest in Charlotte.  As such Charlotte shies away from relationships as she’s always terrified as to what might await the man at Luke’s hands.  That is until she meets Edward.

Charlotte meets Edward through his sister Emma who she met at a ball through an unfortunate incident.  An incident though that saves the lives of three young boys and  Emma comes to stay with Charlotte and Catherine until she can get her life sorted out.  When Edward meets Charlotte he learns soon enough she’s no ordinary woman and this intrigues him.  Edward works for the Crown as a secret agent and it isn’t long before a whole conspiracy begins to unfold and both Charlotte and Edward are completely entangled in it.  Once again Charlotte finds herself bouncing between worlds getting information as she is the one person with access to both Edward’s world and that of Luke’s and that is when the sparks begin to fly both in keeping alive and between Edward and Charlotte.

Michelle Diener has a way of bringing the past alive through her writing and I was entranced with the setting and the characters.  I immediately liked Charlotte as she was both sympathetic due to her childhood and yet strong for having come through it to be the woman she is now.  I liked her spunkiness, the way she always stood up for herself, and the fact that she never minded taking risks.  Edward too was a good character.  He was one of those men who shied away from relationships of any kind but then he’d never met anyone like Charlotte before and that brings me to another thing I liked – there was romance but it was not overdone in any way; it was just perfect.  Even Luke who shouldn’t be a character to like was someone I ended up feeling sorry for and therefore liking.

The Emperor’s Conspiracy was such a good read for me and while it was the first of Michelle Diener’s books that I read, it will not be the last.  If you like historical fiction with a touch of mystery, suspense, and romance then this is the one for you!

The Emperor’s Conspiracy by Michelle Diener is touring with Historical Fiction Virtual Book Tours and I was very pleased to be the first to kick off the tour but be sure to check out the other tour stops to see what everyone else thought of the book too.  Michelle can be found on her website and you can pick up a copy of her book at Amazon.com or Amazon.ca.

I have one copy of The Emperor’s Conspiracy by Michelle Diener to share with my US readers.  To enter…

This giveaway is open to US residents only (no PO boxes) and I will draw for the winner on Saturday, December 8/12.  Good luck!

Source:  Review copy provided by Historical Fiction Virtual Book Tours and Gallery Books via Edelweiss.  No compensation was received and all opinions are my own.