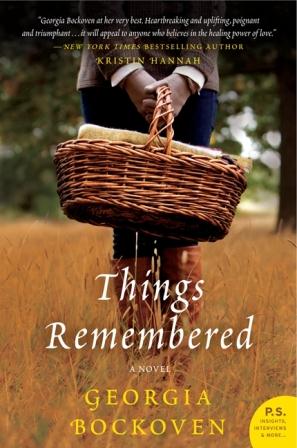 Things Remembered by Georgia Bockoven will very likely be one of my favourite books this year.  This story truly touched my heart and it was one of those books that I wished had been a lot longer than it was because even as I reached the last page I was already missing everyone.  This is an emotional book and I suggest having a kleenex or two handy (I needed them) but it is also a story of hope and new beginnings.

Karla, Heather and Grace came to live with their grandmother Anna when they were young girls as their parents had been killed in a crash.  Heather and Grace were younger and the transition to living with their grandmother was easier but for twelve year old Karla it had been anything but easy.  It seemed she and her grandmother never managed to click together and form any kind of relationship other than one filled with anger.  Karla couldn’t wait to get away and did just that as soon as she could.  Even living away from her grandmother made no difference to their relationship and when Karla went ahead and married the man that her grandmother warned her against they didn’t speak again for more than six years.

Now Anna is dying from congestive heart failure and it will fall to Karla to organize her things and get everything in order.  She decides to go and see her grandmother and get all this done while Anna is still there to answer any questions.  What Karla doesn’t realize is that Anna is waiting for her to come but not for the reasons that Karla thinks.  What Anna wants most of all is to mend their relationship.  She doesn’t want to leave this world without making sure that Karla knows and understands just how much she has always cared for her.  When Karla arrives of course sparks fly but it soon becomes apparent to Karla that arguing is definitely not good for her grandmother and she tries harder to curb her tongue.

What Karla also realizes as time goes on though is that she and her grandmother never really gave each other a chance.  There was so much hurt and anger when Karla came to live with her grandmother that she just never saw past that even into adulthood.  Now, as they begin to unravel the past they both realize the mistakes they made and how they could have done things differently.  Even more importantly they realize all the years they lost and the memories they failed to make and this they both regret.  What they both come to understand though is that it isn’t too late to make some memories; memories that will carry forward into future generations.

I loved the characters in this novel all except for maybe Grace because she was a bit of a spoiled one but ultimately I think by the end of the book even she realizes this.  I felt the biggest connection to Karla and Anna probably because the story is mainly about the two of them but it was more than that.  You see these two women – one old and one young – at their most vulnerable.  They are trying to mend past hurts and open themselves up and this isn’t something that either is used to doing especially with each other.  As Karla learns to see things in the past differently from how she always has she realizes that her grandmother always did love her; she just did it in her own way.  The journey these two women take back to each other will tug at your heart and leave you wanting  to spend time with your older relatives or parents/grandparents and revisit times past so that these memories and traditions continue to get passed down and never lost.

Things Remembered is one of those books that makes you sit back and think about the past and the here and now and how we should take advantage of every minute we have.  It is a beautiful story that comes highly recommended by me especially if, like me, you enjoy a story grabs your heart and doesn’t let go.  I loved it!

Things Remembered by Georgia Bockoven is touring with TLC Book Tours so be sure to pop by the other tour stops to see what others thought of the novel.  You can find Georgia on her website and Facebook as well.  Your own copy of Things Remembered can be purchased here in the US and here in Canada.

Source: Review copy provided by TLC Book Tours and the Publisher. No compensations was received for this review and all thoughts and opinions are my own.