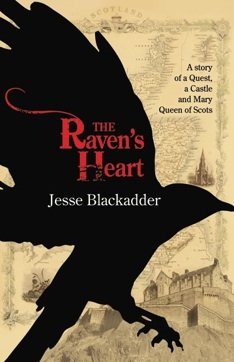 The Raven’s Heart:  A Story of a Quest, a Castle and Mary Queen of Scots by Jesse Blackadder is an epic tale that is full of treachery, intrigue, obsession, love, and the battle for power in 16th century Scotland.  I was completely and fully immersed in this novel and putting it down was very much out of the question which says a lot for this book as it is almost 500 pages.  I’ve said this many times but novels such as The Raven’s Heart are exactly why I enjoy historical fiction so much.  I was a little familiar with Mary, Queen of Scots but in reading this novel I learned so much more about her and I loved that.  The Raven’s Heart is a perfect mix of history and fiction and it’s sure to please any historical fiction fanatic!

Mary Stuart, Queen of Scots and Alison Blackadder, seemingly two women with nothing in common and yet over the years will form a strong friendship.  When Mary first meets Alison she meets her as a boy named Robbie.  Alison has spent her childhood disguised as  a boy to protect her from her own family and it’s all she knows and is comfortable with.  Mary is returning home after being in France for thirteen years and her arrival is much anticipated by both Alison and her father William Blackadder.  They hope that the young Queen will restore to them Blackadder Castle which was taken from them years ago but it’s anything but simple to accomplish this.

To do so Alison will have to change everything about herself; the biggest of which is to become Alison once again.  The plan is for Alison to become a lady-in-waiting to the Queen and try to get as close to her as possible and then plead her and her father’s case to get their lands back.  Soon enough the Queen uncovers that Alison and Robbie are in fact the same person but instead of being really upset with it, she is more intrigued.  A woman disguised as a boy could travel much more freely, in turn hearing and learning much more.  The idea fascinates the Queen so much that she asks Alison to instruct her and her ladies on how to dress and act like boys.  On a few occasions when they venture out it becomes a dangerous pastime and definitely not one fit for a Queen.  The years pass and Alison, loving the Queen, is loyal to her throughout everything; even through things she isn’t especially proud of.  All in the hope of regaining her family’s birthright.

There are many characters in The Raven’s Heart and each is well developed in their role in the novel.  The novel is based on actual events from the reign of Mary, Queen of Scots and while Alison is a fictional character, the others are not.  That being said Alison was the perfect character and story line to weave into this tale of Mary, Queen of Scots.  Her story was believable as was she and with the woven in historical detail it was fascinating to read.  The writing is exceptional as are Jesse Blackadder’s descriptions of the court along with the gowns and the lands, and the people.  And yes the author’s surname is indeed the same as Alison’s.  Jesse Blackadder went on a quest to learn the origins of her name and discovered the ruins of the Blackadder House on the banks of the Blackadder River and hence The Raven’s Heart was born…

The Raven’s Heart by Jesse Blackadder is on tour with Historical Fiction Virtual Book Tours so be sure and visit the other tour stops.  You can connect with Jesse on her website, blog, Facebook, and Twitter.  Your own copy of The Raven’s Heart can be purchased on Amazon or Amazon Canada.

I have one copy of The Raven’s Heart by Jesse Blackadder to share with my readers.  To enter…

This giveaway is open internationally and I will draw for the winner on Saturday, December 15/12.  Good luck!

Source: Review copy provided by Historical Fiction Virtual Book Tours and the Publisher. No compensation was received and all opinions are my own.