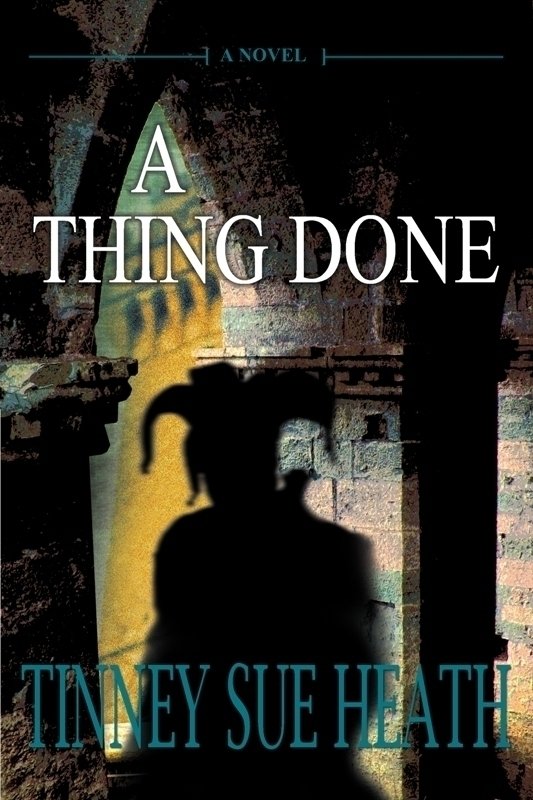 A Thing Done by Tinney Sue Heath is based on actual historical facts and vividly brings to life 13th century Florence with its descriptions of the food, palaces, clothing, and people.  A Thing Done is a novel rich in historical detail but it is also a novel of love, friendship, and loyalty.

The novel opens at a party where Corrado, a Jester, is there with his group of friends to entertain the guests.  However when he is asked to execute a fool’s jest on a couple of the guests he knows that it will have no good outcome and he is quite correct.  He does as he’s told though as he has no choice.  Corrado comes from the poor section of town and his station in life doesn’t offer him the option of saying no to those higher in standing than he is.  As expected his prank leads to an all out fight and ends with him being caught in the middle of two very important families.  As is the custom one of the families offers a marriage as a way to restore peace but it all goes horribly wrong.  When all is said and done a woman is unforgivably insulted and being that she is not one to stand by and accept that in a peaceful way things go from bad to worse quickly as she demands vengeance.  As matters continue to escalate Florence finds itself in the grip of what could very well be a civil war and there seems to be no end in sight.

I found this story to be so well developed when it came to the characters.  I was surprised by how captivated I was by the Fool Corrado.  I’m not normally drawn to male characters but Corrado was such a good person who, despite his station in life, still strived to do what was right if he could.  At times he was quite funny as when someone would ask him to do something he would automatically think to himself how it was going to come to no good end and yet he could find no way out of doing it even though he tried really hard to.  I also admired his loyalty to his friends Neri and Ghisola who he lived with.  Neri was also a Fool and the leader of their group and Ghisola was his girlfriend.  Corrado and Neri had grown up together and were as close as brothers but when Corrado begins to spend more time doing things in secret their relationship shows the strain.  As Corrado becomes more embroiled in the vendetta between the Lords he finds himself just struggling to survive.

I was also taken with the author’s writing.  She is a very descriptive writer and it really brought to life a time in history that I knew nothing about.  The descriptions of the food, the places, the talents of the jester, the differences between the upper and lower classes – all made me feel as though I could thoroughly picture the scene in my mind and watch it unfold.  I really enjoyed this novel.  I always enjoy learning something new and also this novel was really out of the norm.  Telling the story from the angle of the Jester makes it unique and different.  Couple that with the excellent historical details and it makes for a really great read!

A Thing Done by Tinney Sue Heath is on tour with Historical Fiction Virtual Book Tours so be sure to check out the other tour stops.  You can learn more about Tinney Sue Heath on her website and you can purchase your own copy of A Thing Done at Amazon or Amazon Canada.

I have one copy of A Thing Done by Tinney Sue Heath to share with my readers.  To enter…

This giveaway is open to US residents only (no PO boxes) and I will draw for the winner on Saturday, February 2/13.  Good luck!

Source:  Review copy provided by Historical Fiction Virtual Book Tours and the Author.  No compensation was received and all opinions are my own.