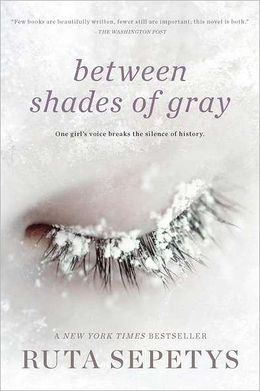 Between Shades of Gray by Ruta Sepetys has got to be one of the most powerful novels I have and will read this year. The story that unfolds between the pages of this book has touched me more than I can say. Between Shades of Gray tells us about the re-locations that Stalin ordered during World War II of people from countries like Lithuania, Estonia, etc. I’ve read several books on the Holocaust but this I had never read about. I received this book from Sandy at You’ve Gotta Read This! (Thank you Sandy) and I alternated between the book and the audio version and I think it affected me even more because of that. At the end of the audio the author speaks and then breaks down in tears at the very end and I can’t tell you how wrenching it was to cry with her. Between Shades of Gray is a story of people surviving against all odds – it is heartbreaking and I think it will haunt me for a long time to come.

Lina is fifteen years old in 1941. She’s a normal girl who loves to draw and loves to spend time with friends and look at boys. She had no idea that life could and would take the turn it did when Soviet officers invade her home and take her family away from everything it’s ever known. They are forced onto a train car that has less than desirable conditions and even worse Lina, her mother and her brother have been separated from Lina’s father. At this point they have no idea what may have happened to him. The journey to Siberia is horrifying and then the family is forced to work in a prison camp. The conditions are beyond horrible and they are often cold and always starving.

Lina’s life is no longer easy. It is an extremely hard existence and having to see her family suffer alongside her is heartbreaking. The novel alternates from what is currently happening to her and her family to times in the past when they were all happy and together with her father. Lina is a brave soul and such a strong character. She loved to draw and even used that as a tool to document what was happening to them. While many in her camp faltered and died or just plain gave up, Lina didn’t. She had a will to go on and the hope alive in her that there had to be something better for them in the near future. It was what kept her alive – that determination and will to live. The novel shows us that the while a body can be beaten down, the human spirit can’t and that is inspiring.

This is a young adult novel but it reads very well for adults. This is an unforgettable story and one that is worthwhile for us to read and remember. This kind of travesty should never have happened and people should never have had to suffer in such a way. The way the author unfolds this story for us completely draws us into the horrific world of Lina and you find your heart just breaking for her and so many others. For those who like historical fiction or books on the holocaust Between Shades of Gray is a must read. It is certainly a story that I will never forget.

Ruta has a new novel coming out on February 12 called Out of the Easy and it sounds like it’ll be another fantastic novel by this incredibly talented writer.  I can’t wait to read it so stay tuned for  a review.

Source: My own copy received from a friend.