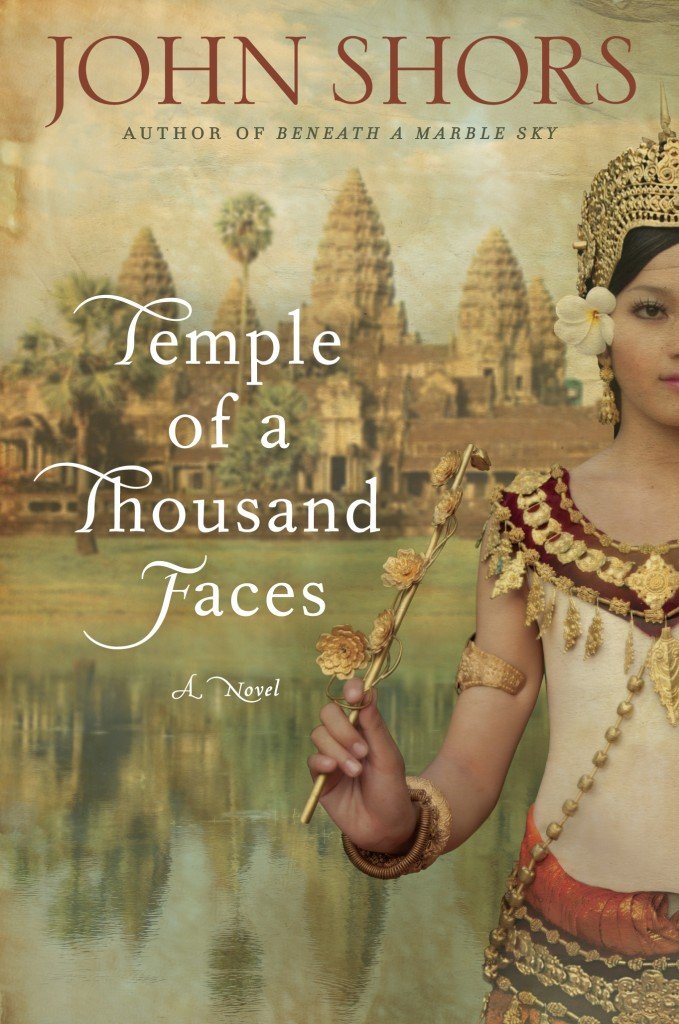 As most who read my blog know I am a huge fan of John Shors for a few reasons. First and foremost is that he is an incredible writer and I love his books. When you pick up a book of Johns you can be guaranteed that you will be transported to another time and place for a while and that you won’t soon forget the tale that he weaves. However there is another reason and that is that John always helps out a charity with the launch of each new novel and I think that is such an amazing thing to do and for that he will always have my utmost respect.

His newest novel Temple of a Thousand Faces launches on February 5. I’ve started it and I can already tell you that I am invested in this story and enjoying it immensely. As with an earlier novel of his John goes back in time nearly a thousand years ago and brings to life the legendary temple of Angkor Wat – we have love, war, and heroes – all the ingredients to make up a really good book!

With Temple of a Thousand Faces, John will be making a financial donation from the proceeds to a children’s hospital in Cambodia that serves needy families. As well for the next month John will be collecting the names of of everyone who “likes” his Facebook page (facebook.com/johnshors) and for every person who does John will send a toy or a book to a needy child in Cambodia. Well I don’t know about you but that seems like a really easy thing for us to do – like John’s page and a child in need will get a toy or book. Win — win situation!

So what exactly is Temple of a Thousand Faces about…

When his land is taken by force, Prince Jayavar of the Khmer people narrowly escapes death at the hands of the conquering Cham king, Indravarman. Exiled from their homeland, he and his mystical wife Ajadevi set up a secret camp in the jungle with the intention of amassing an army bold enough to reclaim their kingdom and free their people. Meanwhile, Indravarman rules with an iron fist, pitting even his most trusted men against each other and quashing any hint of rebellion.

Moving from a poor fisherman’s family whose sons find the courage to take up arms against their oppressors, to a beautiful bride who becomes a prize of war, to an ambitious warrior whose allegiance is torn—Temple of a Thousand Faces is an unforgettable saga of love, betrayal, and survival at any cost.

Advance Praise for Temple of a Thousand Faces…

“Written in Shors’ enjoyable style … this novel is destined to be a blockbuster. Highly recommended.” –Historical Novels Review

“A gripping love story. John Shors vividly recreates the world of 12th century Angkor Wat with his breathtaking descriptions, and packs it with a powerful tale of danger and revenge that had me hooked.” –Kate Furnivall, bestselling author of The Russian Concubine

“Shors infuses the story with fascinating information about the ancient temple of Angkor Wat and Buddhist and Hindu cultures.” –Kirkus Reviews
“An epic, extraordinary novel about love, beauty, and war, Temple of a Thousand Faces is sure to please.”–Sandra Gulland, bestselling author of Mistress of the Sun

I have 3 copies of Temple of a Thousand Faces that John will personally sign and send to my winners. What do you have to do to enter – well, only two things…

1. You must “like” John’s Facebook Page at facebook.com/johnshors (just click on the link and it will open up John’s Facebook page in a separate window for you). Let me know that you did and you are entered to win.

2. For 3 extra entries blog or tweet this giveaway so we can spread the word. This isn’t only about winning a book – it’s about lighting up the eyes of a needy child in Cambodia with a book or toy. The added bonus is that you’re entered to win a copy of a great book!

This giveaway is open to US and Canadian residents (no PO boxes) and I will draw for the winners on Saturday, February 9/13.   Again, simply go and like John’s Facebook page (facebook.com/johnshors ) – it’s for two good causes – one to promote Temple of a Thousand Faces and to help some kids. You have to like those odds!  Good luck to all!