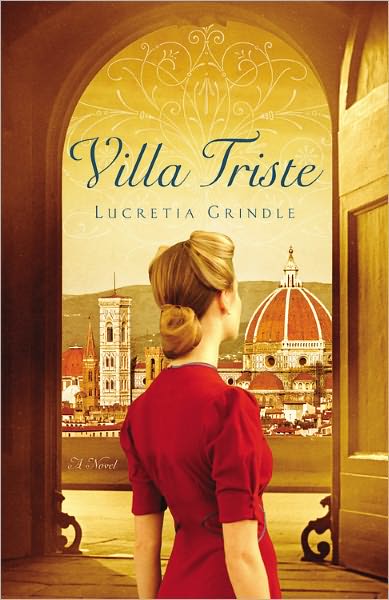 Good day everyone – sorry I’ve been absent the last bit here.  I haven’t been feeling my best.  I had some tests and then got hit with the nasty flu bug that refuses to leave our city and my house.  Things should pick up a bit next week.  In the meantime I have a great book to share with you all which sounds great called Villa Triste by Lucretia Grindle which released on January 22.  I’ll give you some information on the book – isn’t the cover pretty?  Then at the end of the post there is a giveaway so be sure to enter for your chance to win.

Florence, 1943. Two sisters, Isabella and Caterina Cammaccio, find themselves surrounded by terror and death; and with Italy trapped under the heel of a brutal Nazi occupation, bands of Partisans rise up.

Soon Isabella and Caterina will test their wits and deepest beliefs as never before. As the winter grinds on, they will be forced to make the most important decisions of their lives. Their choices will reverberate for decades.

In the present day, Alessandro Pallioti, a senior policeman agrees to oversee a murder investigation, after it emerges the victim was once a Partisan hero. When the case begins to unravel, Pallioti finds himself working to uncover a crime lost in the twilight of war, the consequences of which are as deadly today as they were over sixty years ago.

Buy at:  Amazon, Amazon.ca, B&N, and IndieBound
Read an excerpt

I have one copy of Villa Triste by Lucretia Grindle to share with my readers courtesy of Hachette Book Group.  To enter…

This giveaway is open to US and Canadian residents only (no PO boxes) and I will draw for a winner on Saturday, February 9/13.  Good luck!