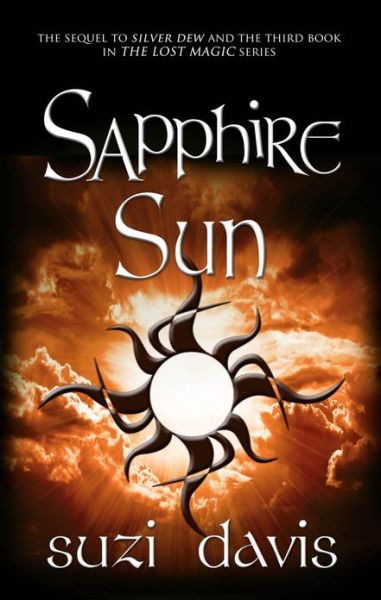 Sapphire Sun by Suzi Davis is the third book in The Lost Magic series and all I can say is I hope there are more!  I’ve been hooked on this series from the very first book Amber Frost and then Silver Dew again had me anxiously waiting for the next book which brings us to Suzi’s newest release Sapphire Sun which was fantastic!  These novels are aimed towards a Young Adult audience but as an adult I have always enjoyed my time spent reading the adventures that Suzi has spun in The Lost Magic series.  As a note I’ll say that there may be a few spoilers as it’s kind of hard to write a review without speaking of the other books at all but it will all be kept to a minimum as I’d hate to spoil the books for anyone.

Amber Frost finds Grace learning of her power and Silver Dew finds her learning how to use it.  It also leads her and Sebastian into great danger and a battle that ultimately strips them of their memories.  Sapphire Sun finds Grace, Sebastian, and David living with the Jensons’ and it seems all three are experiencing headaches and nightmares.  Grace especially has such vivid dreams and when she wakes she is certain that someone has been in her room watching her.  She wonders if it could be David who she really doesn’t trust but he and Sebastian are good friends so she tries to let her misgivings about him go.  However she can’t help but notice that Sebastian seems to be acting more strange as each day goes by and she worries about what may be happening to him – is he remembering and more importantly what is he remembering.  Everything changes when Grace is called in a vision by the spirits and commanded to embrace her destiny and it is up to her to release the Lost Magic and guide those who will be drawn to her because of it.  Truthfully Grace wants none of it.  She just wants to marry Sebastian and leave all of this behind but will she be able to — not likely!

It isn’t long before Grace is forced into fighting the dark evil that is lurking all around her.  She is fighting for something that means more to her than life itself but is she strong enough?  She gathers together a group of followers and together they set out to find the most evil power and conquer it.  This journey will teach her much about herself , the people around her, and most importantly about the power of love that exists beyond the borders of time.  And that folks is all I’m going to say because to say more would give away the story and I refuse to do that.  What I will say though is the ending took me by surprise so kudos to Suzi!

Suzi Davis is the kind of author who makes you care about her characters and has you rooting for them even in the face of utter hopelessness and she paints such a vivid picture of the surroundings and the buildup to destruction that you can feel the magic swirling about you.  Grace is such a great character that I felt a connection with from the very first book.  It has been interesting to watch her grow into a adult and learn what is truly important to her as well as seeing the relationship between her and Sebastian grow.  While in Sapphire Sun we do come to a conclusion of many things I can still see an opening for yet another novel and I’m hoping Suzi’s fans can convince her of what a good idea that would be!

For those who enjoy novels of adventure, romance, and magical elements that are sure to entice you then The Lost Magic Series – Amber Frost, Silver Dew, and Sapphire Sun are quite simply books that you don’t want to miss.  I very much enjoyed the journey they took me on!

Be sure to visit Suzi’s website and you can find her on Facebook and Twitter as well.  You can pick up Sapphire Sun on Kindle in the US and Kindle in Canada as well as for your Nook.  Sapphire Sun can certainly be read on its own but to truly experience the magic of these books I would urge you to read all in the series and they come at excellent prices for your Kindle as well as the first two books being available in paperback so be sure to check them all out!  Thanks for another great read Suzi – you’ll always have a fan of The Lost Magic series here at Peeking Between the Pages!

Be sure to pop by tomorrow as Suzi will be here with a guest post and a giveaway of Sapphire Sun!

Source:  Review copy provided by Suzi Davis and Central Avenue Publishing.  No compensation was received.  All opinions are my own.