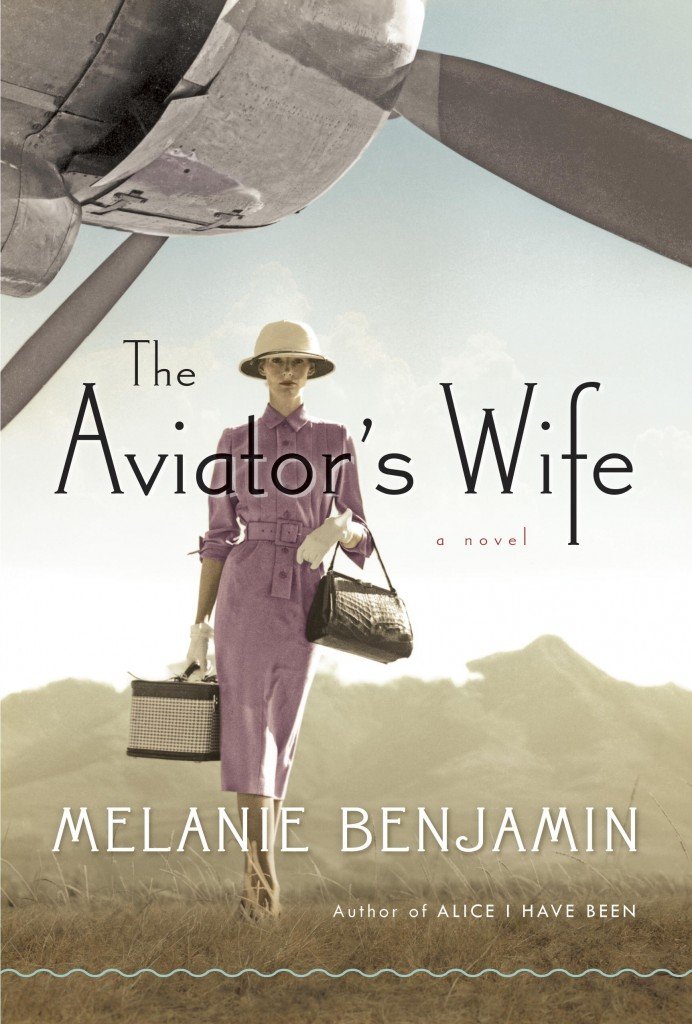 The Aviator’s Wife by Melanie Benjamin is an extraordinary  story.  I don’t know of many people who haven’t been fascinated at one time or another by the Lindbergh story.  You know the story of Charles Lindbergh who earned his fame as an aviator and then later the whole horrible ordeal of their child being kidnapped and later found dead.  Yet how many of us know the woman behind the man – Anne Morrow Lindbergh?  Melanie Benjamin has taken Anne, a woman who valued her privacy, and brought her alive for us in a way that will touch your heart and soul.

Anne, the daughter of the U.S. ambassador to Mexico, meets Charles when her father brings him home to meet his family.  Anne, never one to be in the spotlight as her sister usually has it never dreams that Charles will notice her.  Yet this is one time she wishes she would be noticed by the Colonel who has just made his solo flight over the Atlantic that has garnered such praise and excitement.  Nobody is more surprised than Anne when Charles does ask to call on Anne.  They go flying  together and Anne’s life is never the same again.

While there was much I didn’t know about Charles Lindbergh and learned through this book it is Anne that the book focuses on and how she felt about the man she married, their life, and later the regrets she had.  Charles seemed a larger than life man to the public who adored him and alternately hated him at different points in time and he seemed much the same at home.  He was a domineering man who liked things done a certain way – his way.  Yet in the beginning of their relationship they had fun going off on flights together and seeing the world.  When Anne became pregnant and had Charles Jr. she thought they would settle down but they didn’t.  Charles insisted on them leaving for weeks or more at a time and even though Anne didn’t want to leave the baby she went.  At the time they were first married it was only the 1920’s and women still generally followed their husband’s wishes whether they agreed with them or not.  After the loss of their child Charles insists upon burying it all and moving on but how does a mother ever move on from such a life-changing event.

This novel takes an intimate look into Anne’s life from the beginning of her time with Charles in 1927 to the end of his life in 1974 as she sits with him trying to understand finally some of the decisions he made in his life that affected her and their family.  For Anne, life with Charles threw her into a spotlight that she never got used to and never liked.  They were constantly barraged by cameras and reporters and absolutely no part of their lives was left untouched.  For me though the parts that really made me feel for Anne were of her private life with Charles.  She was forever trying to live up to what he expected of his wife and family.  At one point in her life she had her own dreams of being a writer but everything became overshadowed by Charles and yet she was a strong woman as she brought up 5 more children all on her own and ran their home although with direction from Charles via phone from wherever he might have been.  I have to wonder how much she would have done had she taken a different direction in her life.

The Aviator’s Wife is beautifully and descriptively written and Benjamin’s research into Anne’s life is amazing but even more touching is that she made it her mission in this novel to bring out the emotional side of Anne Morrow Lindbergh and not just the woman we heard about in the news or saw in pictures.  She makes a statement in her author’s note that she always feels rewarded when reading one of her books prompts someone to do even more research into the person she has written about – well it’s certainly true for me as I’ve already picked up a couple of the books she recommended and can’t wait to read them.  I can’t possibly do this novel justice but I can say it’s a favorite and one I hope that a lot of others will enjoy as well especially if you’re a fan of historical fiction!  The Aviator’s Wife is why Melanie Benjamin is one of my favorite authors – she is an amazing writer!

The Aviator’s Wife by Melanie Benjamin is touring with Pump Up Your Book.  Stop by to check out all the other tour stops and you can connect with Melanie on her website, Facebook, and Twitter.  You can pick up your own copy of The Aviator’s Wife at Amazon or Amazon Canada.

I have one copy of The Aviator’s Wife by Melanie Benjamin to share with my readers.  To enter…

This giveaway is open to US and Canadian residents (no PO boxes) and I will draw for the winner on Saturday, March 2/13.  Good luck!

Source: Review copy provided by Pump Up Your Book and the Publisher. No compensations was received. All opinions are my own.