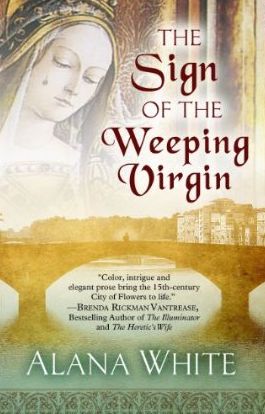 The Sign of the Weeping Virgin by Alana White is a historical mystery that takes place during the Renaissance era which is one of my favorite time periods so this novel really appealed to me.  More intriguing is the mystery of the missing beautiful girl and the painting of the Virgin Mary crying miraculous tears.  This novel is rich in historical detail and is beautifully written in such a way that it brings the streets of Florence alive to it’s readers.

The novel opens with Guid’ Antonio returning home to his wife and child after being away in Rome for two years on political business.  Guid’ Antonio, a respected lawyer, is a prominent citizen, in part due to his friendship with Lorenzo de’ Medici, the city’s leader.  When he and his nephew Amerigo go to see what has been happening in the city they are surprised to find that their once peaceful city is no longer.  It seems that the kidnapping of the girl by the Turks and the tears of the Virgin Mary have the citizens of the city believing it is because of God’s wrath against Lorenzo de’ Medici and his adamant refusal to end his war with the Pope.

Lorenzo believes it is all a set up as does Guid’ Antonio as well so he sets out to investigate along with his nephew.  Their investigation takes us on a whirlwind journey from the marketplaces of Florence to the studios of famous painters Leonardo da Vinci and Sandro Botticelli.  All the while clues are being discovered that are leading them closer and closer to discovering who is behind the mysterious happenings but can Guid’ Antonio stay out of danger with all the upheaval in the city against the de’ Medici’s long enough to do the solving.

I found the beginning of the novel a bit slow as you are being introduced to all the characters and even the story is slow to start as Guid’ Antonio has just arrived home and is familiarizing himself with everything again.  However as it got going I became more and more invested in finding out what or who was behind the missing girl and the tears of the Virgin Mary in Guid’ Antonio’s church.  This book is apparently the first in a series featuring Guid’ Antonio and the only thing I would say that I’d love to see in future books is more character development in terms of seeing more of Guid’ Antonio’s family life included as it would give him more of a personal feel to the reader – I didn’t feel I got to know him as much as I would have liked.  Other than that though I really enjoyed the story and I’m looking forward to hopefully reading more mysteries with Guid’ Antonio as the lead character.

If you enjoy historical mysteries and the Renaissance period as I do then my guess is you’d really enjoy this novel.  It’s a book to take your time with and savor otherwise you may miss the beautiful sights and sounds of Florence that are brought alive on it’s pages.

The Sign of the Weeping Virgin by Alana White is touring with Historical Fiction Virtual Book Tours so be sure to stop by and check out the other tour stops for more reviews, interviews, and giveaways.  You can learn more about Alana White’s work on her website as well as finding her on Facebook.  Your own copy of The Sign of the Weeping Virgin at Amazon or Amazon Canada.

I have one copy of The Sign of the Weeping Virgin by Alana White to share with my readers.  To enter…

This giveaway is open Internationally!  I will draw for the winner on Saturday, February 23/13.  Good luck!

Source: Review copy provided by Historical Fiction Virtual Book Tours and the Publisher. No compensation was received and all opinions are my own.