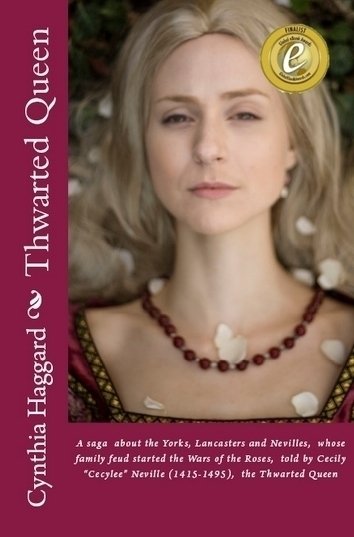 Thwarted Queen by Cynthia Haggard is a novel that encompasses the life of Cecylee (Cecily) Neville.  I have read a couple of books about Cecily and what I find most interesting is how different authors take the events in history and then weave their stories around them.  With each novel that you read you learn a bit more than you knew before and Thwarted Queen is definitely rich in historical detail which I enjoyed a great deal.

Cecylee lived in the 1400’s which wasn’t an easy time for women.  At nine years old she is betrothed to thirteen year old Richard who is to be the future Duke of York.  Luckily for Cecylee her mother refuses to let her leave home and after her father dies she sends Richard away too.  So Cecylee grows up being able to do the things she loves like reading and learning but eventually Richard does come back and wants an answer as to whether she will marry him or not.  At first Cecylee wants no part of it but she begins to realize she has feelings for him and agrees to be his wife.  Their life that follows is often tumultuous but by all accounts it seems they loved each other very much.

Cecylee is living happily enough with her ladies but when a handsome archer shows up Cecylee finds she can’t help but be attracted to him.  One night of passion with this lowly fellow will cause a rippling effect throughout her family’s future as Cecylee bears a child by him.  Although Richard is steaming mad at her he agrees to keep her secret and accepts the child as his own.  This boy will eventually become King Edward IV.  At a time when a husband could put his wife to death for an indiscretion such as Cecylee committed why did Richard choose not to?  First he loved her and secondly he seemed to take a lot of her advice to heart and follow it.  They made a formidable team when it came to solving the problems that the family faced.

Cecylee is a great historical character.  I’ve loved in her the other books I’ve read as well.  She was a strong, smart, and spirited woman who felt that women should have rights.  Unfortunately for her she didn’t live in a time that allowed that and for the most part had to follow what her husband dictated.  At the same time it seemed he realized that he had a spirited woman and he appreciated that.  But Cecylee didn’t have an easy life.  She bore thirteen children and lived which proves her strength at a time when so many women died in childbirth but the sad part is that she outlived her husband and all of her sons and really had no relationships with her daughters although that was not unusual for the time.  At a time when women normally died at a younger age it’s interesting to note that Cecylee lived to eighty years old which again proves to me her strength of body and mind.

There isn’t a lot of information about Cecylee- she’s a lesser known historical character – which makes this novel even more of a treat as for me that’s one of the things I love with historical fiction and that’s getting to learn something.  As for the novel I really enjoyed the first half of the book as we went through Cecylee’s girlhood and then into her marriage and having children.  I did find the second half of the book to drag a bit only because it was focused a bit more on the constant battle for the throne and sometimes the sheer number of people involved could get confusing.  Those are minor complaints though as I breezed through this rather large novel quite quickly and enjoyed it as I would imagine any historical fiction fan will!

Thwarted Queen by Cynthia Haggard is touring with Historical Fiction Virtual Book Tours so be sure to check out the other tour stops for more reviews, interviews, and giveaways.  Be sure to visit Cynthia’s website and you can pick up your own copy of Thwarted Queen at Amazon, Amazon.ca, or Kindle.

I have one paperback copy of Thwarted Queen by Cynthia Haggard to share with my readers.  To enter…

This giveaway is open to US residents only (no PO boxes) and I will draw for the winner on Saturday, March 2/13.  Good luck!

Source: Review copy provided by Historical Fiction Virtual Book Tours and the Author. No compensations was received. All opinions are my own.