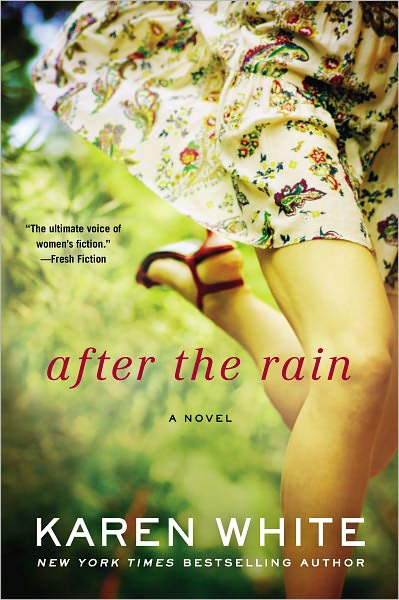 After thoroughly enjoying Falling Home by Karen White on audio (my review) I knew I wanted to listen to After the Rain as well despite having a review copy. There’s just something about an audiobook, especially one with a good narrator that really adds that extra special something to a good story. After the Rain was narrated by Meredith Orlow and she was great with the different voices and really bringing the emotions of the novel across to the audience. Often I find that a sequel doesn’t hold up to the first book but that’s not so in this case. After the Rain is a charming novel of hope and second chances and it was fantastic but then again I’ve come to expect nothing less from author Karen White.

Suzanne has been on her own since she was a teenager and now she’s on the run again. When she stops off in Walton, Georgia she has no intentions of staying but the community of Walton has a way of drawing a person into it and before long she finds herself being persuaded to stay a while. Her first encounter in Walton is with Joe Warner and it’s a memorable one especially as she makes a few blunders directed at his brood of six kids so needless to say they don’t get off on the right foot. However most of the people of Walton open their hearts to Suzanne and try as she might not to, she realizes that she is becoming very attached to a lot of them as well.

Suzanne hasn’t had much experience with children but she finds her heart going out to Joe’s kids especially his oldest daughter Maddie. Maddie is at a time in her life when not having a mother is really difficult but it’s not the only thing that brings the two together. Suzanne learns that Maddie loves to take pictures and wants to be a photographer much like Suzanne and she’s really talented too. Suzanne really wants to help her if she can and then of course there’s Joe and that undeniable attraction that the two of them have. Yet Suzanne can’t let herself fall into the trap that is Joe and the town of Walton – she just can’t. Plus she can’t risk hurting them and her heart at the same time.  I’ll leave the story line there other than to say that that I loved how everything came together in this story as well as the unfolding of the little mystery of the necklace.

What I most loved about this book was getting to revisit the great people I first met in Falling Home. It was like getting together with old friends again and I loved every minute not to mention that Walton sounds like the absolute best place to live. The sense of family and community is so heartwarming. The characters are all great but one of my favorites has to be Ms. Lena. She’s one of the oldest ladies in Walton and her memory is far from the best most of the time but she’s absolutely hilarious with her romance novels and offhand remarks about hanky panky. You can’t help but love her to bits. I know I sure wouldn’t mind getting a chance to visit the fine folks of Walton again in the future!  Once again I was wowed by the wonderful storytelling of Karen White and I’m now even more anxious to delve into her newest The Time Between which is due out this June!