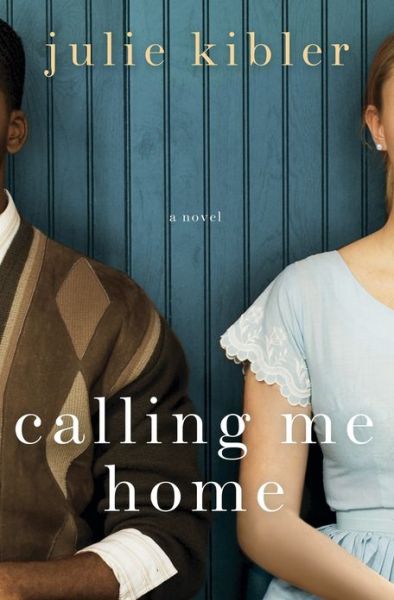 Calling Me Home is the debut novel of Julie Kibler and what a fantastic book this was for me and I loved it! I listened to the audio version which was narrated by Bahni Turpin and Lorna Raver and boy did these two ever bring this story alive! Calling Me Home is an incredibly emotional novel of old family secrets, friendship, and forbidden love that will grab your heart and not let go. I was pulled in from the very first page and I laughed and cried my way through this amazing book – be sure to have some tissues at hand!

Dorrie has been doing eight-nine year old Isabelle’s hair for more years than she can count and over these years the two have become close. Still Dorrie is surprised when Isabelle asks her to go on a road trip with her to attend a funeral in Cincinnati but she cares about Isabelle, and with issues of her own at home that she’d like to get away from for a few days, agrees to take her. Little does Dorrie know that this journey with Isabelle will be one that changes both of their lives.

Isabelle grew up in Kentucky in the 1930’s. She was a headstrong girl with opinions of her own and a will to do what she wanted. As was common in the 30’s in Kentucky her family employed a black housekeeper whose son and daughter also did chores around the home. What wasn’t common at all was the young Isabelle falling in love with their housekeeper’s son Robert and he with her. This was a town that wasn’t tolerant of black people at all to the point of not allowing them out after dark. Isabelle wasn’t like that and her only dream was to marry Robert and have a family with him and she acts on those desires. The two of them risk everything to be together but of course it’s not meant to be and Isabelle is torn from Robert in a most terrible way. Her love for him though never dies and neither do the secrets that stem from their relationship…

Dorrie will admit to always having been curious about Isabelle’s past as it’s not something that Isabelle has readily shared so when Isabelle starts telling Dorrie about events in her past she is all ears and what she learns is enough to make her heart go out to this woman even more. With the novel alternating between the 1930’s in Kentucky to the present, Isabelle shares her journey through life with Dorrie and in the process helps Dorrie to sort out her own troubles with being a single parent and learning to trust and open her heart to love once again.

I don’t want to say much about Isabelle’s story because it really is one that needs to be experienced by the reader. I will say that her story broke my heart as did the reasons for it in the first place. I believe people – no matter their race or religion, or anything else that makes them supposedly different – are all the same. Whenever I read books that show the intolerance that people had and even now still have against others angers me. It makes me sad because our world would be a much more peaceful and happy one if acceptance was encouraged instead of intolerance. What I admired most about Isabelle was her belief that all people were the same and for her willingness to open her heart to people no matter what their race was.

Calling Me Home is truly a novel you don’t want to miss whether you read it or listen to it as I did. It will leave an imprint on your heart and it’s not a story to soon be forgotten as you move on to the next book. I finished listening to it a few weeks ago and can still clearly feel the emotions I experienced while listening to Isabelle’s story. I’m in awe of Julie’s storytelling ability and her knack for giving us characters that so truly and deeply make their way into our hearts. Even though the novel is quite sad at times, it is a beautiful novel well worth reading that will haunt you long after you turn the final page!