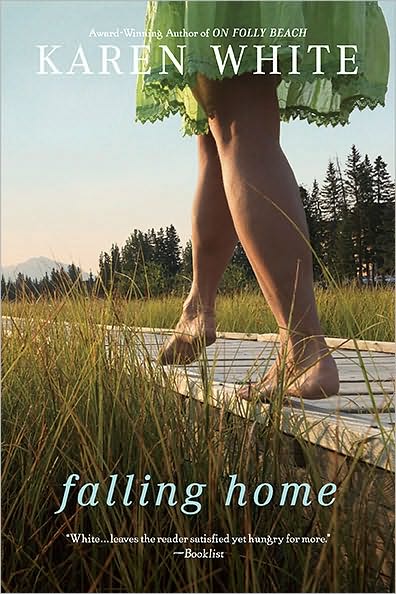 I am a huge fan of Karen White and I can’t believe it took me this long to read Falling Home but I can say that I absolutely loved it! I listened to the audio version narrated by Lyssa Browne and she does a fantastic job. Her tone and way of telling the story made me feel as though I was right there getting to know all the fine folks of Walton, Georgia. Karen White’s novels have a way of drawing me into the story from the first page and just not letting go. Falling Home is a novel that will bring laughter and tears but most of all it will remind you to treasure that which is important to you and that’s family and friends.

Cassie hasn’t spoken to her sister Harriet in fifteen years. Why you ask? Well it’s been fifteen years since her sister stole her fiance and married him herself. So at twenty years old Cassie packed up and left the only home she’d ever known in Walton, Georgia and moved herself to the big city of New York. She’s done well for herself too with a great career and a new fiance. All it takes though is one call from her sister telling her that her father is dying and Cassie knows that she has to make the trip back home to see him.

As she finds herself back in the sweltering heat of Walton and the ways of her people she can’t help but find herself being sucked back into life there. Of course there are her nieces and nephew, especially the eldest Maddie who so much like her that she has missed as well. It doesn’t hurt that her old childhood friend Sam is infuriatingly gorgeous and try as she might she can’t help but compare him to her fiance back in New York. As things heat up between them and Sam confesses his true feelings Cassie begins to reevaluate just what is important to her and what scares her the most is that it doesn’t at all point to that high powered job and gorgeous fiance of hers. Then, as events take a turn that Cassie could never have predicted, she knows that she must stay in Walton a little while longer.

This book is much more involved than what I’ve said here but to say more would ruin it for potential readers. Falling Home will take you on an emotional journey and this family will work it’s way into your heart so much so that you find yourself caring for them as if they were your own family. As always Karen’s novels are beautifully written and it is just that and her character development that manage to evoke such an emotional response from readers. You come away from this novel wanting to connect with those you love and telling them that you love them. It was an excellent book to listen to and I firmly think that it added so much more emotion for me listening to it. There is also a sequel which released recently called After the Rain and I’m listening to it now! Falling Home comes highly recommended by me as do all of Karen White’s books!