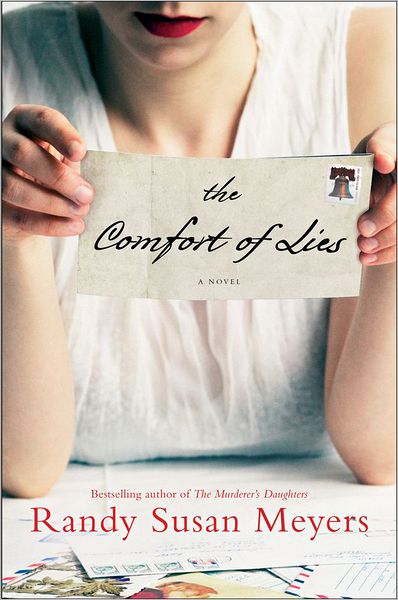 The Comfort of Lies by Randy Susan Meyers is an emotional and deeply moving novel. I listened to the audio version narrated by Amy McFadden and as always I think that listening to the book adds an extra element of emotion that I really enjoyed.  The Comfort of Lies is a novel that shows us the consequences, not always good, of the decisions we make in our lives and how they affect us and others. It takes us into the complex nature of marriage, the devastating consequences of affairs, and the lies we tell ourselves in order to make it through our daily lives.

The novel revolves around the lives of three women and the little girl who weaves them all together. Tia gets herself into an affair with the married Nathan who of course tells her that he has a terrible marriage and promises that he will leave his wife. Naturally that never happens and it becomes very real to Tia when she becomes pregnant and Nathan tells her ‘to take care of it’ because he’s married with children of his own and no intention of leaving his wife. Tia is devastated but decides to have the baby and put it up for adoption to a good family. She does not see Nathan again.

Juliette, Nathan’s wife, knows about the affair but Nathan has promised her it’s over and she is willing to give their marriage another try. They have built a life for themselves and were happy, so she thought, and she wants a happy and stable home for her boys. This decision doesn’t come without its own issues though as Juliette no longer trusts Nathan as she once did. However over time it seems their marriage has gotten back the strength it once had. That is until Juliette learns that the affair of five years ago produced a child – a child that Nathan knew about and chose never to mention.

Then we have Caroline and Peter who adopted Savannah who is now five years old. Caroline is deeply devoted to her career in research and truthfully had never really wanted children but her husband did and she’s adapted although she feels very unqualified to be a parent even after five years. However they have given Savannah a good and stable home and she wants for nothing.

I think this is such a good novel in terms of showing how harmful an extra-marital affair can be on everyone involved and in this case on one very innocent life. I can’t say I related to any of the characters because they are all so deeply flawed and I absolutely don’t condone ever having any kind of a relationship with a married man and yet this novel really holds you captive because you just have to know what is going to happen. It made no difference that I didn’t relate personally to any of these characters because the power is in the story itself.

Ultimately these three women evolve into better women because of what they’ve been through. They learn to stand on their own and do what’s best for little Savannah even if it’s not entirely comfortable for them. If you like novels that deal with the complexities of marriage, the trials of adoption and motherhood, or the devastating results of infidelity then this is a book you’ll want to pick up. I think that The Comfort of Lies would make a terrific book club selection as there are just so many issues that would bring about good discussions. For me this was a great book to listen to and I’m looking forward to listening to Randy Susan Meyers first book as well in the near future!