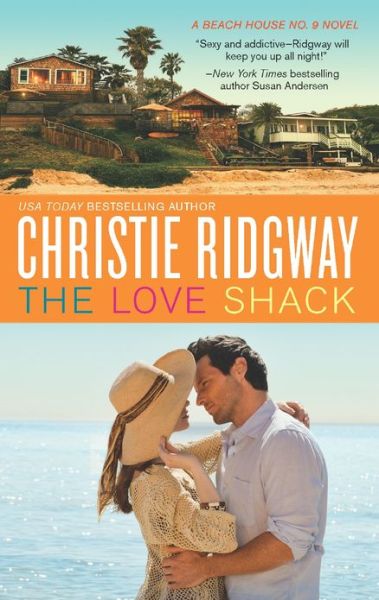 I only have a certain type of romance novel that I like to read and I figured by the description of The Love Shack by Christie Ridgway that I would like it and I was right!  This was a light, easy read with of course a good smattering of hanky panky within the pages and I really enjoyed it.  I like fun romances and The Love Shack fit that description but it had a seriousness to it as well that I think added a depth to it.  This is the final installment in the Beach House trilogy and while I imagine having previously read the other two would have added to my enjoyment of this this one it stands on its own quite well and I’m anxious now to read the other two.

Skye is the property manager at Crescent Cove and is getting ready for another busy summer.  Nobody is more shocked than she is when Gage shows up and surprises her with his arrival since he had reserved Beach House No. 9 under a fictitious name for just that reason. Skye and Gage are not strangers.  They spent childhood summers at Crescent Cove and while Gage was in Afghanistan as  a reporter they had been pen pals exchanging many letters.  It is these letters that kept Gage sane during a really bad experience in Afghanistan so he’s anxious to see his pen pal but also he hopes the peace of Crescent Cove will help him get back his zest for life.

Skye seems off somehow to Gage and he notices how nervous and jumpy she seems.  He can’t help but be attracted to her though.  She’s beautiful and he can’t help but think how much more beautiful she’d be if she wouldn’t always be trying to hide herself behind frumpy clothes.  His attraction runs more than just physical though.  This woman helped him through one of the most trying experiences of his life and it’s not something he can forget.  Yet Skye doesn’t seem interested in him in that way.  As a matter of a fact she gets awfully jumpy at any contact at all.  What is going on with her he wonders and of course he can’t resist making it his mission to find out.  When he does discover Skye’s secret he is shocked and angry but it brings them closer and closer until finally he reveals his secret to her as well.  As Skye finds herself falling deeper and deeper for Gage she can’t stop herself from thinking that in a few weeks he’ll be leaving again and she’ll be left mending a broken heart.

I liked the characters in this story.  There were others besides Skye and Gage but they were my favorite and who I’m focusing on here but that isn’t to say I didn’t enjoy the other character lines as well.  I just felt more connected to Skye and Gage’s story.  They both had been hurt in different ways but in each other they found a way to heal and move forward.  As I said earlier this is a fun read but there is a very real side to it as well that involves people going to war torn countries and what they deal with there and while it’s not touched on deeply it’s still there.  As I said there is quite a lot of hanky panky so be sure that’s your kind of thing before you decide to read the book.  The Love Shack was a great escape for me with a sizzling hot romance and I really enjoyed it.

The Love Shack by Christie Ridgway is touring with TLC Book Tours so be sure to check out the other tour stops for more on The Love Shack as well as the other two novels in the series Bungalow Nights and Beach House No. 9.  You can find Christie on her website as well as Facebook and Twitter.  Your own copy of The Love Shack can be purchased at Amazon or Amazon Canada.

You have the chance to win one of the three books in this series.  Should you win the giveaway you can have your choice of The Love Shack, Bungalow Nights, or Beach House No. 9 by Christie Ridgway (you can click on each title for a description).  To enter…

This giveaway is open to US and Canadian residents (no PO boxes) and I will draw for the winner on Saturday, April 6/13.  Good luck!

Source: Review copy provided by TLC Book Tours and the Publisher via NetGalley.  No compensation was received and all opinions are my own.