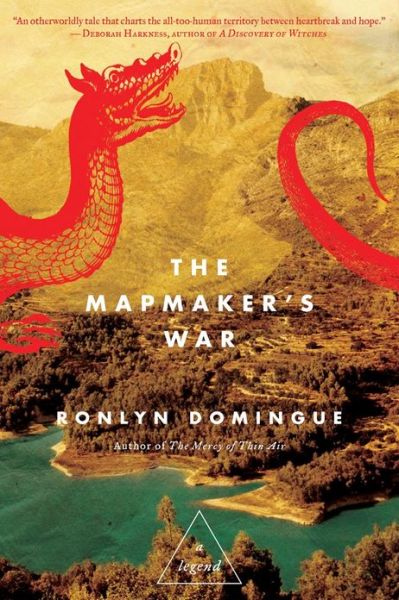 Today’s spotlight is on The Mapmaker’s War by Ronlyn Domingue and it sounds like such a wonderful novel.  I haven’t had the pleasure of reading it myself but one of my favorite blogging buddies, Naida over at The Bookworm has and she really enjoyed it and that’s endorsement enough for me.  Today I’m going to share with you some information on the book and be sure to check out the giveaway at the end of the post for your chance to win a copy!

About The Mapmaker’s War

This will be the map of your heart, old woman. In an ancient time, in a faraway land, a young woman named Aoife is allowed a rare apprenticeship to become her kingdom’s mapmaker, tasked with charting the entire domain. Traveling beyond its borders, she finds a secretive people who live in peace, among great wealth. They claim to protect a mythic treasure, one connected to the creation of the world. When Aoife reports their existence to her kingdom, the community is targeted as a threat. Attempting to warn them of imminent danger, Aoife is exiled for treason and finds refuge among the very people who had been declared her enemy. With them, she begins a new life surrounded by kindness, equality, and cooperation. But within herself, Aoife has no peace. She cannot share the grief she feels for the home and children she left behind. She cannot bear the warrior scars of the man she comes to love. And when she gives birth to their gifted daughter, Aoife cannot avoid what the child forces her to confront about her past and its truth. On this most important of journeys, there is no map to guide her. In this tale — her autobiography — Aoife reveals her pain and joy, and ultimately her transformation.

The Mapmaker’s War is a mesmerizing, utterly original adventure about love and loss and the redemptive power of the human spirit. Watch for its epic sequel, The Chronicle of Secret Riven, in 2014.

Buy at: Amazon, Amazon.ca, and B&N

Ronlyn Domingue is the author of The Mapmaker’s War (Atria Books; March 5, 2013). Its epic sequel is scheduled for 2014. Her critically acclaimed debut novel, The Mercy of Thin Air, was published in ten languages. Her writing has appeared in The Beautiful Anthology (TNB Books), New England Review, Clackamas Literary Review, New Delta Review, The Independent (UK), and Shambhala Sun, as well as on mindful.org and The Nervous Breakdown. Born and raised in the Deep South, she lives there still with her partner, Todd Bourque, and their cats.

I have one copy of The Mapmaker’s War by Ronlyn Domingue to share with my readers.  To enter…

This giveaway is open to US and Canadian residents (no PO boxes) and I will draw for the winner on Saturday, March 23/13.  Good luck!