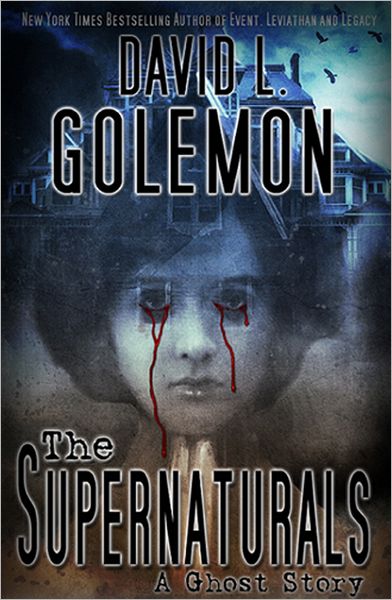 The Supernaturals by David L. Golemon was so good and so creepy! What first attracted me was this fantastic cover!  I listened to the audiobook narrated by Jeffrey Kafer and I think he had the perfect voice to tell this scary tale. I love a good haunted house story so this was a perfect choice for me. I will admit to listening to it one night though and not having the best sleep ever so after that I resorted to finishing it up during the day. It starts out with a bang that drags you right in and the thrills and chills keep on coming right up to the end of the book. It was great!

Gabriel Kennedy, a psychology professor, takes a group of his students to investigate an alleged haunted house called Summer Place. Things get out of hand and by the time all is said and done one of his students has gone missing. Of course Gabriel blames himself and his career ends up in a shambles. A few years later though he has a chance to go back to Summer Place and participate in a reality TV show that will be investigating the supposed ghostly hauntings. He really wants nothing to do with this and thinks it will end in nothing good but eventually agrees to participate.

Kelly is the producer of this highly popular ghost hunting TV series and she thinks that Summer Place will be the highlight of her career as she’s planning this event to broadcast live on Halloween night. For this to attract the audience she’s looking for though she needs Gabriel and is relieved to have him finally agree to come. She will do anything to make this show a success even to the point of setting things up but even she realizes quickly that Summer Place needs no help in the haunting department.

With everyone at Summer Place it isn’t long before the house comes alive once again feeding on people’s fears and this time it’s bent on destroying anything and everything. Gabriel along with his team The Supernaturals sets out, this time around, to find and destroy the evil that is Summer Place. The evil lurking in Summer Place is strong though and it knows that Gabriel’s team is a danger to it and will do anything to stop them.

This isn’t the type of book where you become attached to any characters or even relate to them. The whole appeal of the book is in the atmosphere of fear that it creates and this one excels at that. I love anything scary and this book freaked me out many times and I loved it. I do think the audio version really added to that because you get the ghostly voices and other such noises that go a long way in getting your heart beating a little faster. I really enjoyed this book and if you like to read or listen to creepy books you probably will to!