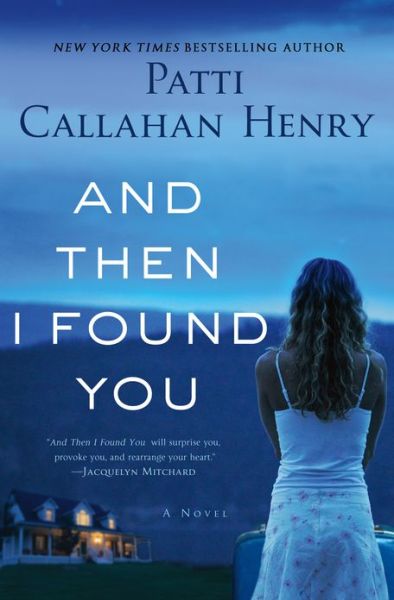 Today, I am thrilled to post a conversation with Patti Callahan Henry, author of And Then I Found You – a novel I absolutely loved!  This novel (my review) is releasing today and it’s also a She Reads book selection for the month of April so be sure to pop over there for more thoughts on the book from some awesome bloggers!  The inspiration for this novel came from within the author’s own family and it really touched my heart.  I highly recommend And Then I Found You and I hope you’ll enjoy the Q&A with Patti – be sure to enter at the end of the post for your chance to win a copy for yourself as well!

What is your new novel about?

And Then I Found You tells the story of Kate Vaughan, a thirty-something-year-old woman who years before had placed her child for adoption. When the girl, now thirteen, locates her birthmother, Kate is happy beyond belief. But now what? Kate had spent her adult life trying to contain her emotions. What is she supposed to do now that her heart has burst open? How can she find a way to move forward in her life? When she realizes that she can only do that by confronting the past, Kate has to make some tough choices—and learn to take some chances.

That’s what the book is about. As for what the book does—well, And Then I Found You explores the emotions and extraordinary change that reunions bring to an individual, and to a family. I understand that adoption reunion stories are complicated, and there aren’t always happy endings, so I wanted to examine a few emotional truths inherent in such a situation. Where do we put our faith and our trust? How do we find the courage to be patient amid unbearable uncertainty? And how do the lost become found?

Was the book really inspired by a true story?

Twenty some years ago, my brave and beautiful sister placed a baby daughter for adoption with a hand chosen family. And then three years ago, this daughter, Catherine, found our family through Facebook. It was a life changing event in the best possible way. Of course I had to write about it.

But my sister’s story is not mine to tell, which is why I like to say that the novel was inspired by a true story, rather than based on it. This novel comes out of my experience—how else would I explore all those messy emotions?—and a good bit of speculation. That old what if that is the best tool in any writer’s tool kit.

How did the reunion with your sister’s birth-daughter affect your family?

Each one of us was affected in a different way. I’m sure if you asked my sister about the emotions that went through her as the birth mother she would give a vastly different answer than I would. And my response would be different from the response of my other sister, because our emotions as “birth aunts” were not the same. And yet as a family, we shared a collective sense of relief and love. All those years of unknowing were broken open with the knowledge that in a parallel world to ours, my niece had been living a wonderful life with a family who loved her greatly. She had exactly what we had hoped for her all along. To say we felt grateful and blessed—well, that would be an understatement.

How did this event touch you as a writer?

This real life story inspired me to write a fictionalized version. It had to be fictionalized. I would never presume to write from my sister’s point of view. The real-life facts are for her to tell. But I’m a writer and I need to write, and no way could I turn away from this incredible happening. So I made a character and gave her a situation, and well, things took off from there.

In order to step back from the real-life situation I asked myself a lot of questions, starting with: What happens when the thing we’ve always dreamed of happening, does? That’s a big question, because while things sometimes unfold as we hope, they rarely unfold as we imagine. That was my first question, and it prompted several others, such as: What truth of this story is to be told? What did it and does it mean to me? How do we live a life with the ache of waiting?

Those were the questions that I started with. The book is my attempt at the answers.

Your readers will likely wonder where fact meets fiction in this novel. How did you decide what to include—and what to leave out?

This was the toughest part of the process—deciding what “facts” to include. The novel took many forms before this final draft. In the first writing, I attempted to write the true-to-life-story and found that instead of writing, I was dictating facts—one after the other—in a bullet point list of boredom. Even though the story was full of mystery and synchrony, I realized that it wasn’t enough for something to have happened in real life, it also has to come to life on the page. That’s always the trick, whether you’re cribbing from real life or creating a fully imagined world.

Did you face any new challenges in writing this book?

Oh, yes! Each time I sat down to my computer I imagined my entire family whispering in my ear: “Don’t make me look bad.” “Don’t say that.” “Don’t tell that part.” Of course they weren’t really doing this (and never would), but in my imagination, my mom, dad, sisters, new niece and children stood over my shoulder to make sure I didn’t write them as bad or evil or selfish or confused (which of course we all are). I couldn’t take the pressure – I made them all look/act/think good and virtuous. Essentially, it ended up being a story about boring people doing moderately interesting things and thinking lovely thoughts.

What have been your family members’ reactions to their first read of the novel?

As of this writing, my parents are the only ones who have read the novel. They say that they love everything about it. But let’s remember, these are my parents and they love me, so this would of course be their proper response.

What’s in store for Patti Callahan Henry fans next? Do you have another book in the works?

I do have another book in the works, but as of right now I’ll say exactly what I told someone last night when they asked, “What are you working on right now?” My answer, honestly, was “I’m working on deciding what I’m working on next.” But I’m always finding my way into a new story and right now that story is about a woman who must discover that things aren’t as they appear…

About And Then I Found You

Kate Vaughan is no stranger to tough choices.

She’s made them before. Now it’s time to do it again.

Kate has a secret, something tucked away in her past. And she’s getting on with her life. Her business is thriving. She has a strong relationship with her family, and a devoted boyfriend whom she wants to love with all her heart. If Kate had ever made a list, Rowan would fill the imagined boxes of a perfect mate. But she wants more than the perfect on paper relationship; she wants a real and imperfect love. That’s why, when Kate discovers the small velvet box hidden in Rowan’s drawer, she panics.

It always happens this way. Just when Kate thinks she can love, just when she believes she can conquer the fear, she’s filled with dread. And she wants more than anything to make this feeling go away. But how?

When the mistakes have been made and the running is over, it’s time to face the truth. Kate knows this. She understands that a woman can never undo what can never be undone. Yet, for the first time in her life she also knows that she won’t fully love until she confronts those from her past. It’s time to act.

Can she do it? Can she travel to the place where it all began, to the one who shares her secret? Can the lost ever become found?

And Then I Found You gives new life to the phrase “inspired by a true story.” By travelling back to a painful time in her own family’s history, the author explores the limits of courage, and the price of a selfless act.

Read an excerpt
Read the Story Behind the Story
Buy at Amazon, Amazon Canada, B&N, and IndieBound

Patti Callahan Henry is a New York Times Bestselling novelist. She has published nine novels (Losing the Moon, Where the River Runs, When Light Breaks, Betweeen the Tides, The Art of Keeping Secrets, a nd Driftwood Summer, The Perfect Love Song,Coming up for Air and the upcoming And Then I Found You –April 2013, St. Martins Press). Patti has been hailed as a fresh new voice in southern fiction, appearing in numerous magazines (Good Housekeeping; SKIRT; The South; Southern Living, etc..).She has been short-listed for the Townsend Prize for Fiction. She has been nominated four different times for the Southeastern Independent Booksellers Fiction Novel of the Year. Her work is published in five languages and all novels are on Brilliance Audio. Two of her novels were OKRA picks and Coming up For Air was an Indie Next choice. Patti is a a frequent speaker at fundraisers, library events and book festivals, discussing the importance of storytelling. Her next novel, AND THEN I FOUND YOU, will be released on April, 9th, 2013 by St. Martins Press. Patti Callahan Henry is a full time writer, wife and mother of three living in Mountain Brook, AL.

I have one copy of And Then I Found You by Patti Callahan Henry to share with my readers.  To enter…

This giveaway is open to US and Canadian residents (no PO boxes) and I will draw for the winner on Saturday, April 20/13.  Good luck!

Interview is pre-done and printed with permission from the Publisher.