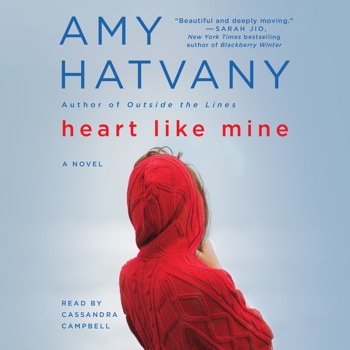 There are some books that touch your heart and Heart Like Mine by Amy Hatvany was such a book for me.  I listened to the audio version narrated by Cassandra Campbell and she is fast becoming one of my favorite narrators.  I find the tone of her voice and her way of telling the story captivates me from beginning to end.  Heart Like Mine is an emotional and moving story that perfectly portrays not only the struggles of womanhood but also the joys and sorrows of families; even those not your own.

Grace, at thirty-six years old, has never had the urge to be a mother.  She’s happy with her career and her life the way it is.  When she meets Victor, a restaurant owner, and learns that he has two children, Ava and Max, who live with their mother she really doesn’t think too much about it.  They stay with their mother for the most part and Grace pretty much stays out of the way when the kids are spending time with their father.  Things quickly turn around though when their mother Kelli passes away under questionable circumstances and suddenly Victor is no longer a part-time father, but a full-time one instead.

Grace is torn because of course she understands that the kids come first and naturally her heart breaks for these kids but at the same time she is being pulled into a life she isn’t sure she wants.  A life that involves caring for the kids, picking them up from school, and all that other stuff that a mother would normally do.  Matters are made worse by the fact that Ava, at thirteen years old, is none too happy to have Grace around at all and takes every opportunity to throw it in her face.  Despite the fact that Grace doesn’t feel equipped to deal with the kids her heart really goes out to Max, who younger seems more open to a relationship with her and even to Ava who she feels is just acting out her grief.  Still she really has to question herself as to whether she can handle all the changes that have been thrown at her and ultimately she has to ask herself whether she is really cut out for a ready made family.

While this barely touches the surface of the depth of this book I think the real impact of the novel is in the emotions that it evokes.  Whether you’re single, in a relationship, have kids or don’t, or have lost someone close to you there is some aspect of this book that almost everyone can find to relate to.  I found I related most to Grace in that I don’t have children other than my puppy and while I like kids I’ve never felt an overwhelming urge to have any and I like how Amy Hatvany portrayed that in the story – that it’s ok if you don’t want kids; that not everyone does and it doesn’t make you any less of a woman for choosing not to have any.  What I do know is that Heart Like Mine would make one fantastic book club pick!  Wow, there are just so many points to discuss in this novel ranging from blended families, having children or not having them, love, grief, and hope.  I just can’t imagine not having some really good talks arise from sharing this book with your book club buddies and to assist you there is even a Reading Group Guide.

The novel is narrated by Grace and Ava with flashbacks to Kelli’s past and I think the audio version splendidly portrays the differences in the emotions of all these characters.  I’m not sure I would have felt the same emotional connection if I had read the book as I did in listening to it because you could feel the characters emotions coming through in the way that Cassandra Campbell brought them alive. For me Heart Like Mine was a beautiful book and I think the audio version just added that extra something special to it.  I wouldn’t hesitate to recommend this book and if you have read it I’d love to hear if you enjoyed it as much as I did!

Source:  Review copy received by the publisher via NetGalley but audio version was purchased by me.