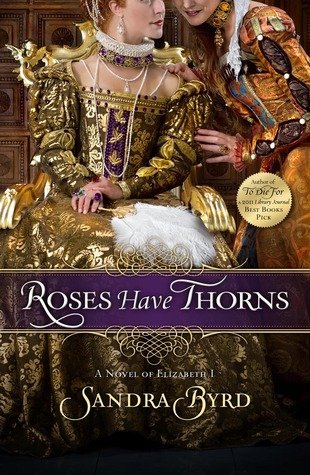 Roses Have Thorns by Sandra Byrd is the last novel in the Ladies in Waiting series and once again Sandra will thrill historical fiction fans with this perfect blend of fact and fiction in her novel about Elizabeth I.  I would have read this latest book either way but I was especially excited to read it because Elizabeth I is one of my favorite Queens in history.  In Roses Have Thorns she really brings alive who the woman was behind the title of Queen Elizabeth I and how, despite her reputation of being strong like a man, she also had a softer side and craved the friendships of other women like we all do.

Elin von Snakenborg leaves her homeland of Sweden in 1565 when she is seventeen years old to come over to England.  At home in Sweden she is engaged and she finds out that her dowry money has been gambled away by her father and her sister and fiancee seem to be making eyes at each other all the time and yet still she wonders if she’s doing the right thing by leaving.  What will life hold for her in England?  When their ship finally makes it to England after a very treacherous journey Helena (the English version of her name) catches the eye of Lord Northampton so much so that after some difficulties they are married.  This raises Helena’s rank to the Marchioness of Northampton and secures her relationship with the Queen even more.

Helena goes on to lose one husband and gain another along with quite a few children but I think the real story is the relationship she had with the Queen.  By all accounts Helena seemed to be a very caring woman who was genuine and she showed that to the Queen who in turn began to trust her with more and more things to do with her royal person.  In this novel Helena is portrayed as being very open to saying things to the Queen and touching her arm or things like that where normally other of her ladies wouldn’t even think of doing that.  She also made her oils and lotions and Elizabeth was known to love things that smelled nice so this was in Helena’s favor as well.  As the years passed Helena was raised in position with the Queen until she was finally at a rank that gave her the power over who could even see the Queen.  This all seems to fit in perfectly with the story as when Elizabeth I passes on it is Helena who is her Chief Mourner.

I can’t see that Elizabeth didn’t have a close relationship with these women who spent all of their time with her.  It would seem unlikely and I really loved how Sandra fleshed out the story to show this personal side of Elizabeth – that she did have people who genuinely cared about her and that she too cared about.  I hope so anyway because I’ve always felt that Elizabeth seemed to live a lonely life.  She constantly had all these people around her and yet really she was alone.  She loved Robert Dudley and yet that love could never be and she never was able to have the family that she yearned for.  I have always loved Elizabeth I for her strength of character and showing that strong women existed even in a time when it wasn’t thought that women had much power in anything and really I hadn’t thought much of her personal relationships before so that made this story even more intriguing for me.

This novel holds true to actual history and I can always tell when I’m really intrigued by a character because I have to look them up and see who they were and what they did.  It didn’t take me long before I looked up Helena, the Marchioness of Northampton and I was pleased to see that just how much this story held true to the actual facts (this is relayed in the author’s note as well).  I find that it makes a book even more interesting to me to know that these people really existed, that they did these things and lived this life.  I found Helena a fascinating woman who was brave enough to leave her homeland at a young age and then forge herself a life – a successful one – in England.  Then to be one one of the women closest to the Queen; what higher honor could there be?  These women like Helena gave up their lives to serve their Queen.  They saw very little of their husbands or children and, in fact, spent almost all of their time with the Queen.  While it was an honor, it must also have been a sacrifice especially for those with families.  It’s been interesting to see the life of the court and Queen through the eyes of those closest to her – her ladies.

I have loved and very much enjoyed all the novels in this series:  To Die For (my review), The Secret Keeper (my review), and now Roses Have Thorns.  These books have shown me a different outlook on three Tudor Queens and they have all been so good.  Sandra is an amazing writer whose novels are rich in historical detail and so well written that they never fail to capture my interest and enfold me in the lives she portraying.  I wouldn’t hesitate to recommend Roses Have Thorns for historical fiction fans as well as any others who would like to start reading up on our history.  These wonderful novels of Sandra’s are a great way to do it!

Roses Have Thorns by Sandra Byrd is touring with Historical Fiction Virtual Book Tours so be sure to pop by the other tour stops to see what others are saying about the book.  You can find Sandra on her website as well as Facebook , Twitter, and Pinterest.  You can pick up your own copy of Roses Have Thorns at Amazon or Amazon Canada.

I have one paperback copy of Roses Have Thorns by Sandra Byrd to share with my readers.  To enter…

This giveaway is open Internationally and I will draw for the winner on Saturday, April 27/13.  Good luck to all!

Source: Review copy provided by Historical Fiction Virtual Book Tours and the Publisher via Edelweiss.  No compensation was recived and all opinions are my own.