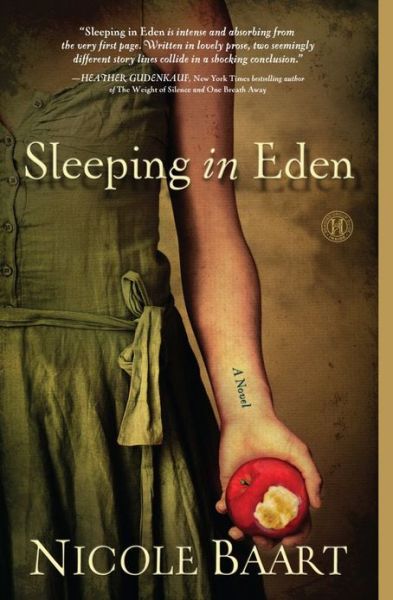 I was really excited to read Nicole Baart’s newest novel Sleeping in Eden which releases on May 21 and it didn’t disappoint in the slightest.  I’ve read two other of her books:  The Moment Between (my review) and Far From Here (my review) so I was already familiar with her writing style and the wonderful tales she weaves.  Sleeping in Eden is a tale of love, deceit, innocence lost, murder, and a mystery that will uncover secrets long buried.  I was immediately drawn into the tangled web that slowly unfolded as I read and I can tell you that this is one of those books that you just don’t want to put down and when you do you make sure to rush back to it.

There are two stories being told in Sleeping in Eden, one past and one present, but ultimately they seamlessly weave together in the end.  I have to admit that I couldn’t figure out how these two separate storylines would come together although I tried really hard.  The opening scene of the novel is of Dr. Lucas Hudson being called out on a man who was found hanging in his barn.  It seems to be a pretty standard case of suicide until Lucas discovers a body buried beneath the hanging man … a body that appears to have been there for a good many years.  Is this the body of Angela, the daughter of the man who has hung himself, who disappeared eight years ago or is it someone else entirely?

Angela had ties to Lucas and his wife Jenna.  Jenna, being a social worker, had spent many hours counseling Angela and essentially the couple had taken Angela under their wing.  When she went missing it hit Jenna especially hard.  Now, eight years later Lucas and Jenna’s marriage is suffering and with nothing else to focus his attention on Lucas becomes very passionate about trying to find out just who the girl is that had been buried under the barn floor for so long.  As Lucas begins to look into missing girls in his attempt to identify the girl things spiral even more out of control with the appearance of someone they once thought was long lost.

Then the novel backtracks to Meg who lived in Blackhawk long before Lucas and Jenna moved there.  Meg was a tomboy through and through growing up but even tomboys grow up and discover boys.  From the beginning she and Dylan seem to have a spark that only grows as they get older but then there is good old Jess next door who has loved Meg forever.  What does Meg do – go with the safe bet or give in to her passionate side?  What seems to be only an innocent love triangle between young people will lead to a tragedy that no one could see coming. As the past and the present collide the consequences will shock everyone.

Sleeping in Eden by Nicole Baart is my favorite of her novels so far and that says a lot as I loved the other two books I read as well.  I would certainly recommend her books in a heartbeat.  She has a beautiful and descriptive way of writing that captivates a reader from the beginning to the end of her wonderful stories.

I have one copy of Sleeping in Eden by Nicole Baart to share with my readers.  To enter…

This giveaway is open to US residents only (no PO boxes) and I will draw for the winner on Saturday, May 18/13.  Good luck!

Source:  Review copy provided by the Publisher via NetGalley.  No compensation was received and all opinions are my own.