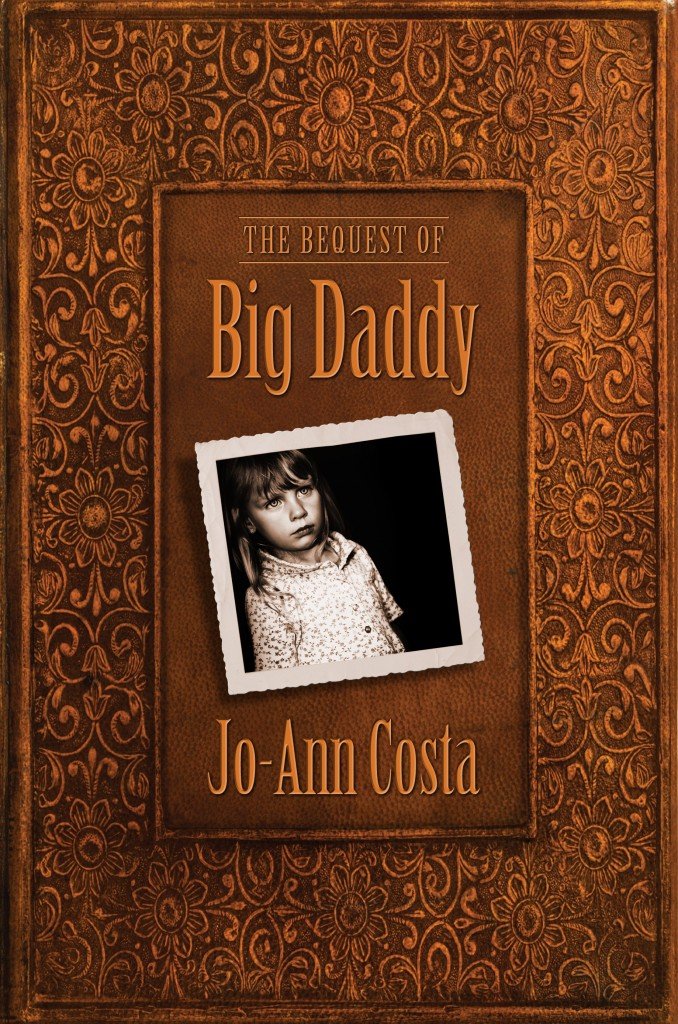 The Bequest of Big Daddy is the debut novel of Jo-Ann Costa and she is a natural born storyteller with characters that are larger than life and not soon forgotten.  The Southern family of the Janson clan has  Big Daddy, Ratio Janson, at its helm ruling his family with an iron fist.  Now that sounds bad and while Big Daddy has a lot of bad habits he’s actually good to those who are family although family also knows to get clear out of his way when the warning signs are there to do so.  Big Daddy has a bad temper and it can snap at a moments notice so when Jo-Dee goes with her daddy to visit the aged Big Daddy it is no surprise when he flies off the handle and they have to leave.  He passes a few days later and between the funeral and Jo-Dee’s natural curiosity she finds herself under the spell of this Big man who was her great grandfather and this curiosity about him lasts well into her adulthood.

The family secrets harbored within this Southern family began generations before Jo-Dee came to be.  They started with Ratio and his birth and a mysterious gravestone in the family cemetery.  Ratio’s father goes off to war so he’s left to be raised by his mother Mina and she isn’t much of a mother being much too self-centered for mothering.  Ratio is left on his own for the most part and really doesn’t have a hard time finding trouble from a young age which finds him in a situation that ultimately changes him.  While working in a sawmill Ration gets a little too close to the owner’s daughter and is thrown in a cell to die but Ratio is much too smart for that and finds a way to escape.  From this point on he meets his first wife and has quite a few kids but Ratio also has a wandering eye and it isn’t long before that eye and his bad temper lead him to do something he can’t fix easily.  He ends up being sentenced to hard labor but even that doesn’t really stop him and eventually he is free.  Of course Ratio doesn’t do anything the normal way so he takes advantage of the black markets going strong after the Civil War and makes his fortune all the while keeping a close eye on his ever growing family.

While not an honest man and certainly not the nicest one around when in a temper Ratio was a character that grabbed me from the very beginning.  Despite seeming to be such a hard man he also had a softer side that fiercely protected those he loved.  He was not a man to be wronged and if he was he exacted his revenge no matter how long it may have taken.  Ratio, having been raised by a woman who didn’t show him affection had a hard time showing it himself and yet he loved his family.  He arranged a family reunion on July 4 of 1908 which was the anniversary of meeting his first wife Eugenie and he held fast to all those in the family attending every year.  While I was horrified and shocked by some of the things that Ratio did I felt that his beginnings had a lot to do with where he went in life.  What direction would his life had taken if he had love instead of neglect?

As the novel slides into 1981 we find Jo-Dee all grown up and still just as curious as she ever was to know more about this man everyone called Big Daddy.  After the annual family reunion she sets out to find out what she can about this mysterious grave and man who has so occupied her thoughts.  Many things come to light on her trip and secrets are unburied but what will she do with these secrets?  Ultimately she knows she can’t destroy her family with them but for Jo-Dee this journey brought her closer to the man who had been Big Daddy.

This was a great read for me and one I would recommend to those of you who like Southern tales as well as family dramas.  Big Daddy was such a dominating force but there were many characters in this novel from big to small who are also well fleshed out and intriguing.  The author Jo-Ann Costa writes in such a way that she fully draws you into the drama of her story and holds you there.  I can’t wait for more from this fabulous debut author!

I have one copy of The Bequest of Big Daddy by Jo-Ann Costa to share with my readers.  To enter…

This giveaway is open to US and Canadian residents (no PO boxes) and I will draw for the winner on Saturday, April 20/13.  Good luck!