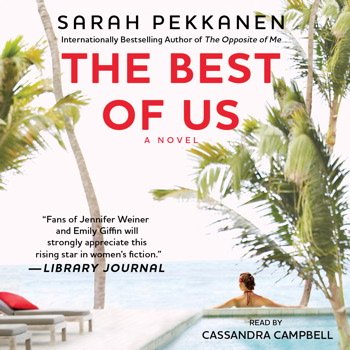 I’ve read a few of Sarah Pekannen’s novels and from the very first one she became one of my favorite authors. Her newest novel The Best of Us is just another reason why she is such a well liked author among readers. I listened to The Best of Us on audio narrated by Cassandra Campbell who has fast become one of my favorite narrators. She has one of the easiest voices to listen to and between the tone of her voice and the story being told I become lost in time for a while.

Who wouldn’t want an all expense paid vacation at a luxury villa in Jamaica? Well a group of old college friends sure can’t turn down a birthday invitation from Pauline, their college friend Dwight’s wife for this trip of a lifetime. Dwight is the one in the group who always seemed to be on the outside and yet has managed to be most successful and is very wealthy. Pauline Is sparing no expense on this trip wanting to make it memorable for her husband.

As everyone is spending time on the beach suntanning and indulging in yummy cocktails and food they are also thinking about their lives both past and present and for the women this was not only a trip of a lifetime, it was also an escape from lives that were becoming overwhelming at times.

Tina is a full time mom with four young kids and she’s having s hard time remembering what it was like to have a life of her own and take pride in it. Ally, a mom as well, is struggling with the news that she may have inherited a genetic disease and Savannah is hiding the fact that she’s getting a divorce from her cheating husband. Then there is Pauline who was never part of the college group and from the sidelines she wonders about the relationships that these women had with her husband as well as hiding secrets of her own. This vacation will force them all to reevaluate their lives and decide what is most important to them.

I really enjoyed the audio production of The Best of Us. Between the storm raging on the island and in the character’s lives Cassandra Campbell really brought it all alive for me. I could almost feel the storm battering the villa they were staying in and I could relate to the characters struggles as well except for Savannah who was not a favorite of mine. As always I’ll be anxiously awaiting Sarah Pekkanen’s next novel while I enjoy catching up on her backlist.

Source:  Review copy provided by Simon & Schuster Audio.  No compensation was received and all opinions are my own.