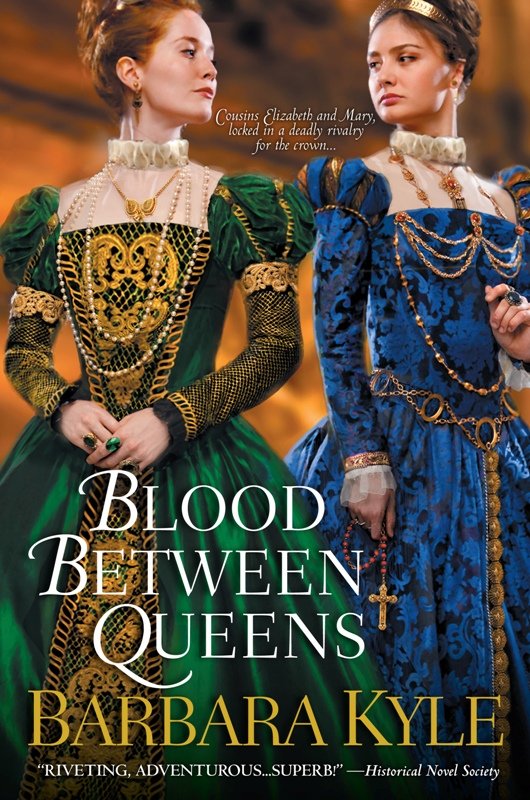 Blood Between Queens by Barbara Kyle is historical fiction at it’s best!  Barbara Kyle expertly weaves fact with fiction in this superbly told story.  To be honest I can’t believe I haven’t read any of her work before as I do have a few of her novels on my Kindle and now have all of them and will certainly be anxious to get to them.  She is a fantastic storyteller and I can attest to that because I read Blood Between Queens in a day and you know it’s a good story when over 400 pages flies by without you realizing it.  Of course it doesn’t hurt that she writes about the Tudor era which is my favorite.  Blood Between Queens centers around the factual story of Queen Elizabeth I and her cousin Mary, Queen of Scots and the well known rivalry between the two of them.  Add to this a fictional story that involves court intrigue, adventure, romance, and a fictional heroine that you won’t soon forget and you have a recipe for success!

Justine Thornleigh was taken in by the Thornleighs when she was just a girl and her family had perished along with her father who was labelled a traitor.  She has grown up loved and privileged and the Thornleighs have kept the secret of who she truly is which is a Grenville.  Having Queen Elizabeth visit her family’s estate is a true honor for her family but the party is cut short when word comes that Mary, Queen of Scots has shown up in England wanting her cousin Elizabeth’s protection.  Nobody is more surprised than Justine when she learns that she has been chosen to be one of Mary’s ladies-in-waiting but that her real mission will be to spy on the activities of Mary and her court and report back to Elizabeth’s court.  Justine is torn between feeling honored by this request and wanting to stay home and spend time with her love Will.  Of course, duty to ones sovereign wins and she sets out to meet Mary and begin her mission as a spy.

Upon meeting Mary and getting to know her Justine begins to wonder if Mary hasn’t been wronged; if maybe the stories about her are exaggerated.  As she learns more about the inquiry being held to determine Mary’s innocence or guilt Justine can’t help but be angered by the clear lack of justice she sees.  When Justine takes steps to prompt Mary in a direction she thinks would be best for everyone involved she jeopardizes her relationship with the only man she loves and absolutely nothing can prepare her for the surprise of someone who appears from her past and changes everything she ever thought was right.  Justine has been brought up to know that her duty lies with Queen Elizabeth and she will risk her own life to protect her if need be.  As Mary plots to get rid of Elizabeth things begin to spiral out of control and nobody is safe.

There is no way to encompass the scope of this novel in a review.  It is most definitely one you need to experience for yourself.   Justine was a great fictional character as is the fictional storyline of the Thornleighs and Grenvilles.  I didn’t realize until after I had read this book that it is fifth in the series but I can attest to it standing on its own quite well although now I really want to read the others to get more background.  Without a doubt though my favorite parts of this story are the ones that address the relationship between Elizabeth and Mary and I was pleased to learn a few tidbits that I hadn’t gotten previously from other books especially on Mary who I haven’t read as much about.  It is novels like Blood Between Queens that make history a lot of fun and very much accessible to anyone.  I’m sure by now it’s obvious I really enjoyed Blood Between Queens and wouldn’t hesitate to recommend it to those who like historical fiction and to those who are curious if you would enjoy it this is the type of book to read.  It’s easy to follow, has a great story and you get to learn something in the process!  Needless to say I have another new author to follow!

Blood Between Queens by Barbara Kyle is on tour with Historical Fiction Virtual Book Tours so pop over and check out the other tour stops for more reviews, guest posts, and giveaways.  You can learn more about Barbara’s work on her website and you can connect with her on Facebook and Twitter as well.  You can pick up a copy of Blood Between Queens for yourself at Amazon and Amazon Canada.

I have one paperback copy of Blood Between Queens by Barbara Kyle to share with my readers.  To enter…

This giveaway is open to US and Canadian residents only (no PO boxes) and I will draw for the winner on Saturday, May 18/13.  Good luck!

Source:  Review copy provided by Historical Fiction Virtual Book Tours and the Publisher via NetGalley.  No compensation was received and all opinions are my own.