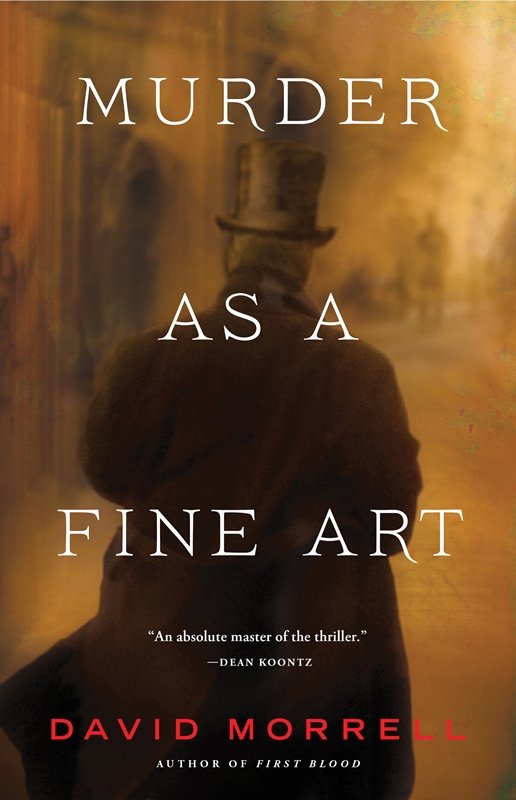 Murder as a Fine Art by David Morrell is a historical thriller that had me flipping pages faster than I thought possible.  This book was fantastic!  Not only is it rich in historical detail that I absolutely loved but it also has a great mystery to keep you guessing.  I love anything suspenseful and I’ll tell you this book had me on the edge of my seat a few times wondering what would happen next.  The setting, London 1854, only added to my love of the book and this author certainly brought it alive to where I could almost feel the fog of London closing in on me.

As the story opens we are introduced to the artist but not just any artist.  This artist specializes in the fine art of murder and has just committed a heinous crime.  London is in a state of panic and many are lashing out at just anybody thinking that they may be the killer. The London police of course are combing the crime scene for clues but you have to remember this is 1854 and forensics was not what it is now.  Then in a conversation with a sketch artist they learn that one Thomas De Quincey actually wrote an essay On Murder which told of  The Ratcliffe Highway murders that took place in 1811 and in very vivid detail.  His descriptions pretty much mimicked the murder they were currently involved in.  Needless to say Thomas De Quincey became their prime suspect very quickly.

Upon meeting the elderly, very little Thomas De Quincey, infamous for his Confessions of an Opium-Eater, Detective Ryan and Constable Becker have to wonder if he would even have the power to commit such a crime.  As they get to know him and his daughter Emily they have even more doubts especially as it seems that De Quincey may be a help in solving the murders.  Unfortunately though they are ordered to arrest De Quincey and that’s when things really spiral of out of control.

You don’t very often read a book where you really like all of the characters but this is one of them with the exception of the murderer of course.  For the bad reputation that De Quincey has he is very likeable in this book as is his daughter Emily.  She was great and unlike many of the young ladies of her time being very outspoken and wearing pants under her skirts instead of the common and very uncomfortable hoops.  She also took part in the investigation and didn’t swoon or anything like that – unless it suited her purpose.  Ryan and Becker were great as well and another thing I enjoyed was the banter between the characters as it was quite often amusing and that lightened the mood of what is otherwise a grim murder.  As I said before this novel is rich in historical detail and I very much enjoyed learning about the beginnings of forensics and the development of the police force.  It was all very fascinating!  Murder as a Fine Art was just an all around great read for me!

Murder as a Fine Art by David Morrell is touring with Historical Fiction Virtual Book Tours so be sure to check out the other tour stops.  You can connect with David on his website as well as Facebook and Twitter.  Your own copy of Murder as a Fine Art can be purchased at Amazon and Amazon Canada.

Source:  Review copy provided by Historical Fiction Virtual Book Tours and the Publisher.  No compensation was received and all opinions are my own.