The spotlight for today is The Apple Orchard by best selling author Susan Wiggs.  The Apple Orchard is the first novel in the Bella Vista series so now is the time to get started!  I have read a few of Susan’s books and really enjoyed them.  They are comfort reads for me and an author that both my mom and I share a fondness for which is rare.  LOL.  I hope you’ll enjoy learning what the book is about and be sure to check out the book trailer as well.  Don’t forget the giveaway at the end of the post for your chance to win a copy for yourself! 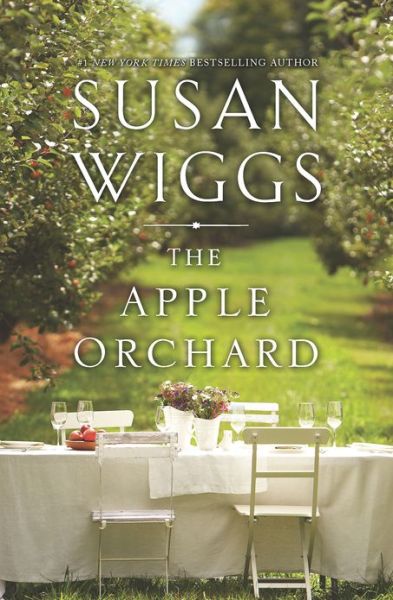 About The Apple Orchard

An out-of-the-blue legacy and secrets from the past are the intriguing catalysts for #1 New York Times bestselling author Susan Wiggs’s richly plotted, enchanting new novel, THE APPLE ORCHARD, the first in her new series since her enormously popular Lakeshore Chronicles novels. Set amid the quaint towns and lush hills of California’s Sonoma County, Wiggs’s emotionally honest narrative explores the real meaning of family and friendship as a successful young woman’s carefully calibrated life is turned on its ear with revelations about who she really is and where she belongs.

At twenty-nine, Tess Delaney has carved out a career doing what she loves most in the world—tracking down stolen art and heirlooms and restoring them to their rightful owners. Tess’s latest coup has been finding a Russian-made lavaliere, valued at $800,000, for Annelise Winther, whose mother owned the jewels before the Nazis arrested her and seized the necklace. Tess is somewhat surprised when Annelise decides to hold on to the treasure rather than put it up for auction. To Tess, the money could change the woman’s life, and she can’t fully understand the primacy the old woman places on the memories it possesses. Indeed, despite the fact that she makes her living from the past, Tess has little connection to her own. A peripatetic mother she rarely sees is her only living relative. Or so she thinks.

Riding high on her latest success, and anticipating a promotion at the Sheffield Auction House in San Francisco, Tess is sideswiped by a visit from a handsome banker, Dominic Rossi, who brings the startling news that a grandfather she never knew she had has gone into a coma. If he dies, Tess will inherit half of Bella Vista, a hundred-acre apple orchard in Sonoma County. The other half will go to Isabel Johansen, the half sister who, until that moment, Tess did not know existed. The shock of the news triggers an anxiety attack that lands Tess in the E.R., where Dominic convinces her that a few days off from work—and a visit to Bella Vista—are in order.

What Tess discovers at Bella Vista will forever change the trajectory of her life. As she meets her sister and the other denizens of this close-knit community, she comes to savor the seemingly simple pleasures this idyllic place can offer. It’s hard, too, not to fall for Dominic Rossi, who is as compelling as he is gorgeous. But there is trouble in paradise, as Tess and Isabel learn the hard truth: Bella Vista is on the verge of foreclosure, and it seems it will take a miracle to save it. As they sort through their grandfather’s papers, the two women begin to uncover many long-concealed facts about the family history—events stretching back to Denmark during the German occupation. But Tess proceeds with caution, knowing that sometimes when you dig into the past you discover things better left buried.

A masterful blend of history, romance and suspense, THE APPLE ORCHARD is one of the best books yet from beloved writer Susan Wiggs.

#1 New York Times and USA Today bestselling author Susan Wiggs says the most important things in life are, “family, friends and fiction.” And that will come as no surprise to anyone who’s read her bestselling Lakeshore Chronicles series, lauded as “Delightful and wise (Publishers Weekly), “Superb…wonderfully evoked” (Booklist) and “Richly evocative, emotionally charged and frequently wryly humorous” (RT Book Reviews).

Her first book was published by Zebra in 1987, and 40 contemporary and historical novels later she is an internationally recognized bestselling author with millions of copies of her books in print in numerous countries. Her novel The Charm School was honored with the Dorothy Parker Award of Excellence and was designated a Favorite Book of the Year by Romance Writers of America. She is the proud recipient of three RITA awards for Lakeside Cottage, Lord of the Night and The Mistress and is often a finalist for the prestigious award, and her books appear regularly on numerous “Best Of” lists.

Susan holds a graduate degree from Harvard and is a former math teacher. It’s no surprise that she a frequent workshop leader and speaker at writers’ conferences across the country, including the literary institution Fields End and the legendary Maui Writers Conference, speaking to aspiring novelists about the profession. She is often interviewed in the media on the topic of writing popular novels for today’s women, having appeared on Talk of the Nation and in the Seattle Times and Portland Tribune. Susan is a member of the Authors Guild, Romance Writers of America and Novelists, Inc. Her blog, The View from Here (http://susanwiggs.wordpress.com), is filled with her photos and observations and was featured in Publishers Weekly.

I have one copy of The Apple Orchard by Susan Wiggs to share with my readers.  To enter…

This giveaway is open to US residents only (no PO boxes) and I will draw for the winner on Wednesday, May 22/13.   Good luck!