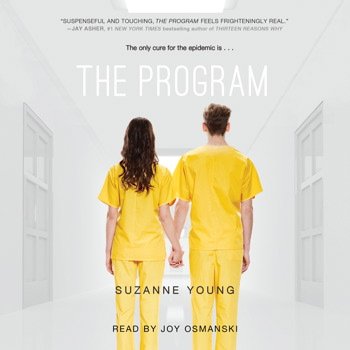 The Program by Suzanne Young is a terrific Young Adult novel and I really enjoyed it. I listened to the audiobook which is narrated by Joy Osmanski and I really enjoyed her tone of voice and felt it added to the story being told. I just couldn’t stop listening to this one and when I had to I went back to it quickly. It was addicting and a lot of that came from the great narrator!

Suicide has hit epidemic levels and in one town and they’ve implemented The Program to combat it. The Program strikes fear in all of the teenagers because when The Program comes and takes you away you come back with none of your previous memories and you are presumably cured. So the teens walk around pretending to be happy and carefree because if handlers notice you acting not quite right you are quickly removed so that nobody else becomes infected.

Sloane and her boyfriend James have been together for a few years. They have a common bond and that was the love they shared for her brother who committed suicide. The two of them are constantly trying to watch out for each other and make sure that they are always maintaining a positive attitude. Yet things start happening around them and James starts going downhill. When he is taken away Sloane is a wreck and they begin to watch her in ernest. When he comes back and hasn’t a clue as to who she is she becomes an emotional wreck and it isn’t long before she is dragged into the program as well. Will these two naturally gravitate back to each other despite their lost memories?

The Program is a fantastic novel and don’t let the fact that it is a young adult novel throw you off because it is every bit as enjoyable for an adult. I think it’s great that Suzanne Young tackles some serious issues in this book like depression and suicide and does it in such a way as to not be overwhelming. It’s just a really well done novel and I have to say that I thought the way it ended left things wide open for another book which I desperately hope to see! I loved listening to this one, really liked the storyline, and I look forward to reading more from Suzanne Young!

Source:  Review copy provided by Simon & Schuster Audio.  No compensation was received and all opinions are my own.