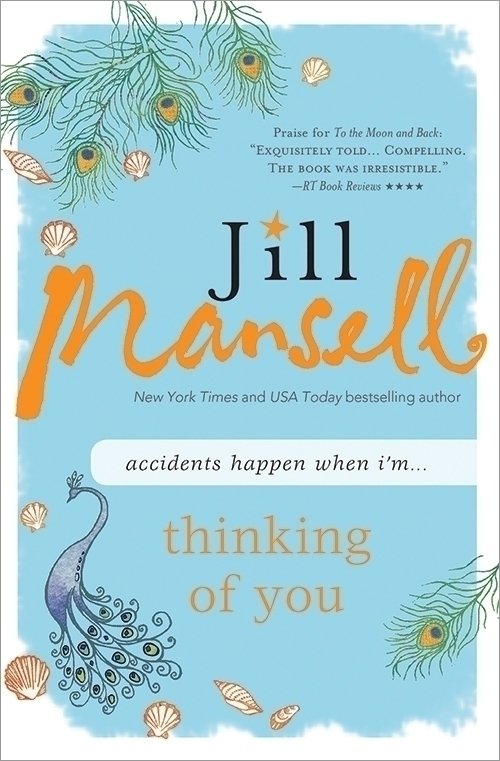 Thinking of You by Jill Mansell released on May 7 from Sourcebooks.  I know I say this every time I read a book from Jill Mansell but I’m going to have to say it again – I love her books!  Jill is my favorite British author and I always look forward to one of her books with great anticipation and I have never been disappointed.  Thinking of You was fantastic and it’s one of my favorites so far.  I thought the storyline was great and the characters were the kind who seemed to step out of the pages of the book right into your own life.  You could see yourself being friends with them and kicking back with a glass of wine.

Ginny is dealing with the empty nest syndrome.   She’s a single mom and her daughter Jem has gone off to university and Ginny misses her horribly but she knows that she has to let go and let Jem live her own life.  With the house feeling really empty Ginny decides to rent out one of her rooms and hopefully end up with a good friend and someone she can do things with.  Unfortunately what she ends up with is a woman who drones on about her ex-boyfriend incessantly and is more likely to drive Ginny crazy than keep her company.  So what does Ginny do – well she gets herself a job as a waitress and not just at any restaurant.  No Ginny picks the restaurant of the man who accused her of shoplifting just days earlier.  This man, Finn, infuriates Ginny but boy is hard not to notice how gorgeous he is and how much her heart pitter patters around him.  Between trying to keep track of Jem at school with a boyfriend Ginny wishes she didn’t have and her own life, which is fast becoming a big disaster, Ginny is finding herself busier than ever.

I think at its core this is a mother-daughter story that shows that life goes on when your kids flee the nest.  It shows that although your child is gone there is still that connection that will never be gone no matter what the distance between you.  Ginny was a great character and I liked her immediately.  Jem though drove me crazy with her bad decisions but I had to keep in mind that she was young.  There was a host of other characters that you either loved or hated but they added a lot to the story.  One that was hilarious was Ginny’s ex-husband who really needed a sock shoved in his mouth most of the time but he really was funny.

One of the things that I love most about Jill Mansell’s books is the escape from real life that they offer me.  I find that they are always an easy read with a good story that keeps me entertained for a few hours and who can ask for more.  Also, you know you are invested in the characters and their lives when you are at turns laughing and then talking out loud to yourself when something happens in the book.  I had to laugh at myself while listening to this book because when someone did something I didn’t like or thought was crazy I would start to chatter out loud.  Not a great idea if you’re out in public!

I listened to the audiobook of Thinking of You which was narrated by Julia Barrie and she did a wonderful job.  I absolutely adored her accent and the different tones she used for the characters.  It was really well done!  All in all, another winner from Jill Mansell for me!  If you’re looking for some chick lit to read give one of Jill’s books a try – you won’t regret it!

Source:  Review copy provided by Sourcebooks via NetGalley.  Audiobook is my own personal copy.  No compensation was received and all opinions are my own.