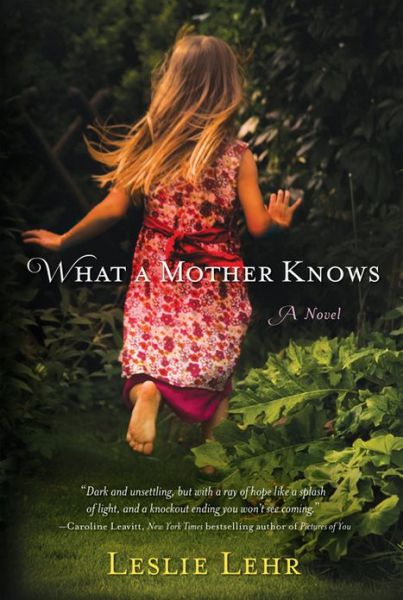 What a Mother Knows by Leslie Lehr is one of those books that grabs you from the very first pages.  You find yourself unable to put it down because as both the suspense and the mystery escalate so does your attention to it.  At its core What a Mother Knows is a story of the bonds between mothers and daughters and poses the question as to just how far one will go to protect those they love.

Michelle Mason is married with two children, Nikki and Tyler.  It all seems pretty normal really except that it’s not.  Michelle has just spent more than a year of her life first in an induced coma and then later in rehabilitation after a horrendous car accident.  Michelle’s memory is sketchy at best.  There is much that she doesn’t remember including the accident itself.  Arriving home after so many months is overwhelming and nothing is as she remembers and even worse everyone around her seems to be acting strange.  Exhausted she falls into bed that first night only to wake up in the morning to an even greater nightmare.  She learns that her daughter Nikki is not away on an exchange program but has actually ran away.  Even in Michelle’s confused mind she knows that that this makes no sense and questioning her husband only deepens her concern as he doesn’t seem quite as motivated to find her as he should be.  Michelle vows that she will find her daughter no matter what.  When she learns that on the day of the fateful accident she had a young man in the car with her and she is being blamed for his death she is devastated.  Just what happened on that life changing day?  If only Michelle could remember…

Michelle was an easy character to relate to.  In the beginning your heart goes out to her for all she has endured with her injuries from the accident.  As time goes on though you admire her for her never ending faith that her daughter is out there and that even though she is far from healed in body and spirit herself she makes it her mission to find her.  As the story goes by Michelle starts to have flashes into the past and slowly as more and more pieces of the puzzle begin to materialize in her mind she realizes that the story of the young man in her vehicle that day is far more complicated than she ever would have thought and the connection to her family truly scares her.

This is an excellent read for those who enjoy a suspenseful and emotional story.  You are kept guessing for the majority of the book as to what actually happened that fateful day and the disappearance of Michelle’s daughter takes many twists and turns.  What never changes though is Michelle’s devotion to finding her and rebuilding their relationship despite all the hardships she suffers in between trying to put her shattered life back together.  I really enjoyed What a Mother Knows and look forward to reading more of  Leslie Lehr’s work in the future.