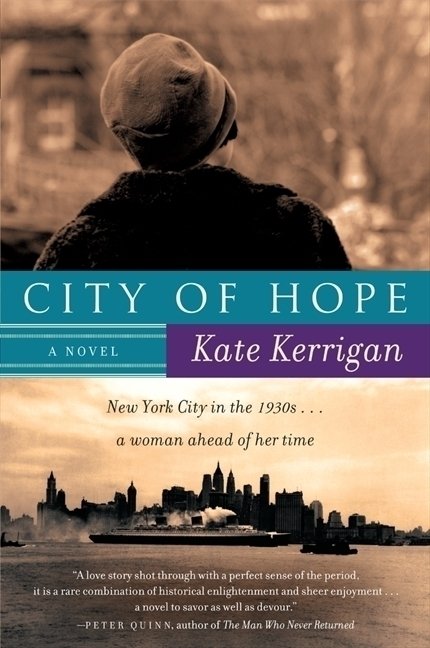 City of Hope by Kate Kerrigan is another novel of hers that will make it to the top of my most loved books of 2013!  I read Ellis Island a few years back (my review) and I loved it and I remember thinking that I hoped there would be a sequel.  Well imagine my excitement when I recently found out there was going to be one.  City of Hope could certainly stand on its own as there is enough background given to follow the storyline from Ellis Island but I really think that your experience would be so much more enriched by reading both.  City of Hope is a novel of grief, loss, love, new beginnings, and ultimately hope in life and the future.

Ellie Hogan has always been a fiercely independent  woman who was well ahead of her time given that her story takes place in the 1930’s.  She had even spent time living in New York in the 1920’s for a while to earn money for surgery that her husband John needed.  It was there that Ellie realized that she needed much more from life than just minding the farm along with John.  While that was John’s dream, it was not hers so even in Ireland she manages to start several businesses that don’t take long to thrive.  Then this man that she loves so much dies and her world is knocked off its axis.  Desperate to escape the pain that threatens to completely overwhelm her she flees to New York to see if she can once again recapture the magic that she once felt there.

Once there it isn’t long before Ellie realizes that New York is nothing like it used to be as the Great Depression has taken its toll on the city.  Still she can’t run back home to Ireland…at least not yet.  As she tries to reacquaint herself with the city she takes notice of the homeless people and her heart goes out to them.  It isn’t long before Ellie has started up homes for the homeless to come and live and work to make a life for themselves.  She pours all of her grief into this new passion of hers and it isn’t long before, it too, becomes a thriving business of sorts.  Ellie has made new friends, has a new life, and yet there is still something missing.  Is it something she left behind in Ireland?  She knows that she needs to find out in order to move on.

I loved City of Hope.  Kate Kerrigan has a way of drawing you so completely into the story she’s weaving that before you know it the end is near and you’re dreading turning the last pages because you don’t want to say good-bye yet.  It felt so good to revisit Ellie and her life.  I liked her character in the first book and again in City of Hope as she so desperately tries to find her way despite being wracked by grief.  I love seeing such strong women in a time when women normally weren’t and thought their only option was marriage.  I’m hoping that there will be one more book as I think there are still things that can be resolved before really saying good-bye to this wonderful story.  City of Hope is a book I would wholeheartedly recommend!

City of Hope by Kate Kerrigan is on tour with TLC Book Tours through to the end of July so be sure to check out the other tour stops.  You can find Kate on her website and Twitter and you can pick up your own copy of City of Hope at Amazon and Amazon Canada.