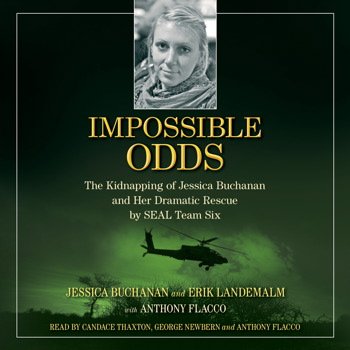 Impossible Odds is written by Jessica Buchanan, Erik Landemalm, and Anthony Flacco. I listened to the audiobook version narrated by Anthony Flacco, Candace Thaxton, and George Newbern. This is the memoir of Jessica Buchanan that tells of her kidnapping by an organized band of Somali land pirates and held for ransom. She was held for three months before she was rescued by the Navy SEALS.

In 2006 Jessica’s only dream was to teach African children and that’s her intention when she arrives in Nairobi, Kenya. Later in 2009 she meets Erik Landemalm who worked to provide aid to those in Africa, they marry and then move to Somalia to start their lives together and hopefully have a family. Neither could have imagined how much their lives would change in just a few short years.

On October 25, 2011 Jessica along with her colleague Poul were kidnapped at gunpoint by the Somali pirates. For an agonizing three months Jessica lived in conditions we can’t imagine and was kept on a starvation diet. It wasn’t long before her health began deteriorating at a rapid rate. Every day of those three months Jessiva lived in terror of being raped or dying, either from sickness or at the hands of the Somali pirates. With negotiations for ransom not going well the Somali’s were becoming increasingly antagonized.

After ninety-three days and Jessica’s health becoming a matter of life or death President Obama ordered Navy SEAL Team Six to attempt a rescues and on January 25, 2012 they did just that. They came in under compete darkness, attacked the camp, killed the pirates, and air lifted both Jessica and Poul out.

Impossible Odds is an incredible memoir to listen to. While I would have been horrified reading about it I felt it even more listening to it and the narrators did the story justice by telling it so well. The story alternates between Jessica’s story and then Erik’s struggles and I’m amazed at them both for sharing this story and I hope in some way it was a healing experience for them both. For myself I can’t ever imagine living through something like that and I have the utmost respect for Jessica and her strength for having gone through this ordeal and come out on the other side against Impossible Odds.

I recommend this audiobook or paper book for those who prefer if you like memoirs. I found it to be a book I didn’t want to quit listening to and even though I knew the outcome I was still held enthralled throughout. It gives a person hope in miracles and new beginnings!

Source:  Review copy provided by Simon & Schuster.  No compensation was received and all opinions are my own.