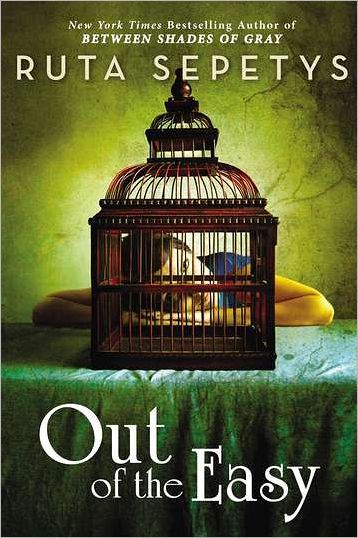 Out of the Easy by Ruta Sepetys is another historical novel for this author but very different from her debut novel Between Shades of Gray which I loved but it is no less captivating. Sepetys takes us deep into the French Quarter of New Orleans in the 1950′s and through her words we live and breathe the atmosphere of that era.

Josie Moraine is just seventeen years old but has been on her own since she was twelve. Being born to a mother who is a prostitute, named after a madam, and growing up cleaning a brothel has left Josie a street smart young woman. She has another side though; one that has grown out of her desire to become something more. As a young girl she had found friends and a job in a local bookstore where her love for books and learning grew.

Josie’s dream is to attend Smith College and there isn’t much she won’t do to get accepted, even to the point of doing things she would never have dreamed of doing before. Just as things start to roll in the right direction Josie’s mother once again pulls her down and Josie can only watch her dreams crumble. Along with that is the murder of a man who had visited the bookstore; a man Josie admired because he treated her like a ‘somebody’. As the police investigate Josie herself finds some interesting clues as to what may have happened but she finds herself frozen to do anything about it. As things heat up in the Quarter and Josie’s mother comes back long enough to mess up Josie’s life again, Josie finds herself in danger and pulling out all the stops to get herself out of it. Will Josie ever be able to realize her dream of attending college and making a life for herself?

I think what really makes this novel is the characters and their relationships with each other. Josie herself is a great character. She’s been dealt a bum hand in life and yet she’s striving hard to better herself. Her friend Patrick has been there for her since she was twelve when his father let Josie live in the room above the bookstore. They have a great friendship and Patrick is such a sweet guy who is always looking out for Josie. Then there is Cokie the driver who would fiercely protect Josie through thick and thin and he was funny; just one of those characters you can’t help but love. Oh and let’s not forget Josie’s love interest Jesse – the more she pushes him away the more he seems to like her. The best though is Willie, the brothel madam. She’s a tough and brassy woman who wouldn’t dare wear her emotions on her sleeve and yet you can tell that she cares deeply for Josie. She knows Josie is meant for more than cleaning or working in a brothel and she means to see it happen. The women working in the brothel, although secondary characters, still stand out. It seems that Josie who had no mother to speak of ends up having a whole lot of people who care and watch out for her.

Out of the Easy is another great novel by Ruta Sepetys that I suspect fans of her first novel will love as well making it another reader favorite. I really enjoyed it and it leaves me waiting once more for the next offering from this very talented author.

Source: Review copy received from the publisher.  Previously posted on BookTrib.  No compensation was received and all opinions are my own.