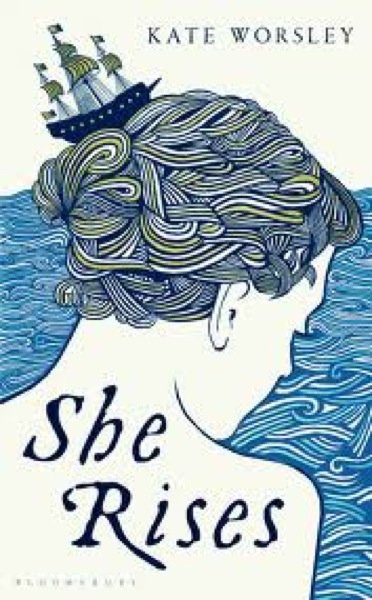 In She Rises by Kate Worsley we meet Louise Fletcher in the year 1740 living on an Essex farm as a dairymaid.  When she is offered a job as a lady’s maid to a wealthy captain’s daughter in the naval port of  Harwich she jumps at the chance to get away.  Louise is captivated by her new mistress Rebecca.  Rebecca is so different from anyone Louise has ever known in her life including herself.  At first Rebecca is horrified at the thought of having a dairy maid as her lady’s maid but slowly Louise wins her over especially after she cares for Rebecca when she contracts small pox.  As time goes on their relationship deepens and the two find, in each other, something they’ve never found in anyone else.  But time and circumstance have a way of changing things and the two are torn from each other.

Then we have Louise’s brother Luke who, at fifteen, has been forced into the Majesty’s Navy while he had been drinking at a local tavern.  He is beaten and when he comes to he finds himself on the Essex and at sea.  Luke knows right off he doesn’t belong there.  He isn’t made to be a seaman but he also doesn’t want to be beaten again.  He’s smart enough to know that he has to mind his own business, ingratiate himself with the right people, and most of all follow orders.  The only thing that matters to Luke is getting back to the girl he left behind.  However Luke stands out from the other men though and soon enough this puts him in a very precarious position in which he ultimately makes a decision that can change his life.

At this point I will say that there is a twist in the story that did surprise me and one I didn’t see coming at all.  Overall I enjoyed this novel.  I found the beginning slow going although interesting enough to keep going and I’m glad I did because the second half of the book picks up a great deal and I didn’t want to put it down until I knew what was happening.  I was much more drawn to Louise’s story than Luke’s and would have liked the focus on only Louise but having finished the book I can see now why that would have been impossible.  The story of Louise and Luke are entwined in such a way that one can’t be told without the  other.  She Rises is a novel that takes you from the harshness of the sea to an engrossing love story.  As a note for some though there are some scenes of sexual content that some readers may find disturbing.

She Rises by Kate Worsley is on tour with TLC Book Tours so make sure and check out the other tour stops.  You can pick up your own copy of She Rises at Amazon, Amazon Canada, and B&N.

I have one copy of She Rises by Kate Worsley to share with my readers.  To enter…

This giveaway is open to US and Canadian residents (no PO boxes) and I will draw for the winner on June 22/13.  Good luck!