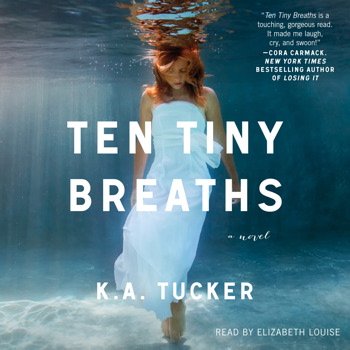 Ten Tiny Breaths by K.A. Tucker is an emotional novel of what can happen when somebody makes a wrong choice and destroys the lives of others. It will tug at your heart, you may shed a tear or two, and you will even have a laugh. It will ultimately teach you the meaning of forgiveness. I listened to the audio of Ten Tiny Breaths narrated by Elizabeth Louise and I really enjoyed her tone of voice and felt she added to my enjoyment of the book.

The lives of Kacey’s parents, best friend, and boyfriend are lost when they are hit by a drink driver. Kacey is the only survivor and she suffers enough guilt to destroy anyone’s soul. Along with that the nightmares of that day, listening to her mother take her last breath and holding her boyfriend’s hand, have her reliving it nightly. In an effort to try to make a new start Kacey and her younger sister Livie leave for Miami.

Kacey has built some pretty solid walls around herself. She doesn’t want to ever care about anyone again for fear of experiencing loss again. The only person she cares about and would protect with her life is her younger sister Livie. Yet when their neighbour Storm and her young daughter come into their lives they are impossible to shoo out and even Kacey finds herself warming to Storm and finding a friendship.

Then there is her mysterious and gorgeous neighbour Trent. Since the accident Kacey had steered clear of emotional attachments and instead always went after the bad boys. Trent certainly fits the description of the hot looking bad boy and yet he is so much more. As much as she tries to deny the attraction she can’t. Until the day she learns something that will turn her world upside down again and maybe this time she won’t be able to find a way back.

Ten Tiny Breaths is a great audio and one I enjoyed a lot. This is a really good story that ultimately highlights the dangers of drinking and driving and the devastation it causes. I loved the characters and the story and was thrilled to find out that there is a sequel featuring Livie called One Tiny Lie which is available on June 11. I can’t wait to listen in on another of K.A. Tucker’s books!

Source:  Review copy provided by the Publisher.  No compensation was received and all opinions are my own.