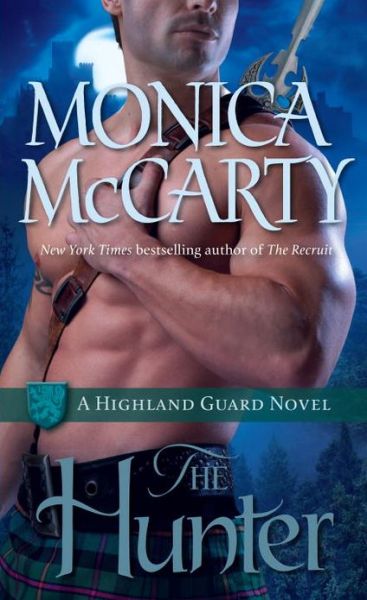 The Hunter by Monica McCarty is the sixth book in her Highland Guard series but you definitely don’t need to read the others to read this one. The books all focus on a different member of the Highland Guard so really they are separate stories although readers of this series will have the added enjoyment of the mention of characters they likely already know. The Hunter is historical romance at its best but more than that it had a really good storyline and characters that you found yourself truly caring about.

Ewen, “Hunter”‘ works for the Highland Guard under King Robert the Bruce and the fight for Scotland’s freedom is raging. The Highland Guard are an elite group of soldiers who are very well trained as warriors. Ewen has gained a reputation for being one of the best trackers there are and that is exactly how he ends up with his next assignment to find a missing courier who has been working undercover for King Robert the Bruce. All is well until he learns that the courier is a woman! For Ewen the war is much too dangerous for women and he plans on holding onto that opinion… but he had yet to meet Sister Genna.

From the moment Ewen sets eyes on the beautiful spitfire that is Sister Genna (Janet) he is lost but oh my does she infuriate him with her streak of independence. Good heavens one shouldn’t have these feelings for a nun so imagine his relief when he learns of her true identity. Yet that only adds fuel to the fire as the attraction between the two is heating up and Ewen has to watch his step. Janet is promised to another and the King will have his head on the block if he goes near her. There is no way that Ewen can jeopardize his career in the Highland Guard or his people for this woman. Or can he?…

This was an enjoyable read for me and quick because it’s fast paced and the characters themselves really pull you into the story. Although I’ve not read any of Monica McCarty’s books before this will most definitely not be the last one. I plan on catching up on the rest of the Highland Guard series. I like her style of writing and while she has some steamy romantic scenes they aren’t overwhelming or vulgar and I really appreciate that. For fans of historical romance this is a winner!

The Hunter by Monica McCarty is on tour with TLC Book Tours so be sure to check out the other tour stops. Monica can be found on her Facebook page and you can pick up your own copy of The Hunter at Amazon or Amazon Canada.

I have one copy of The Hunter by Monica McCarty to share with my US readers.  To enter…

This giveaway is open to US residents only (no PO boxes) and I will draw for the winner on July 13/13.  Good luck!

Source:  Review copy provided by TLC Book Tours and the Publisher via NetGalley.  No compensation was received and all opinions are my own.