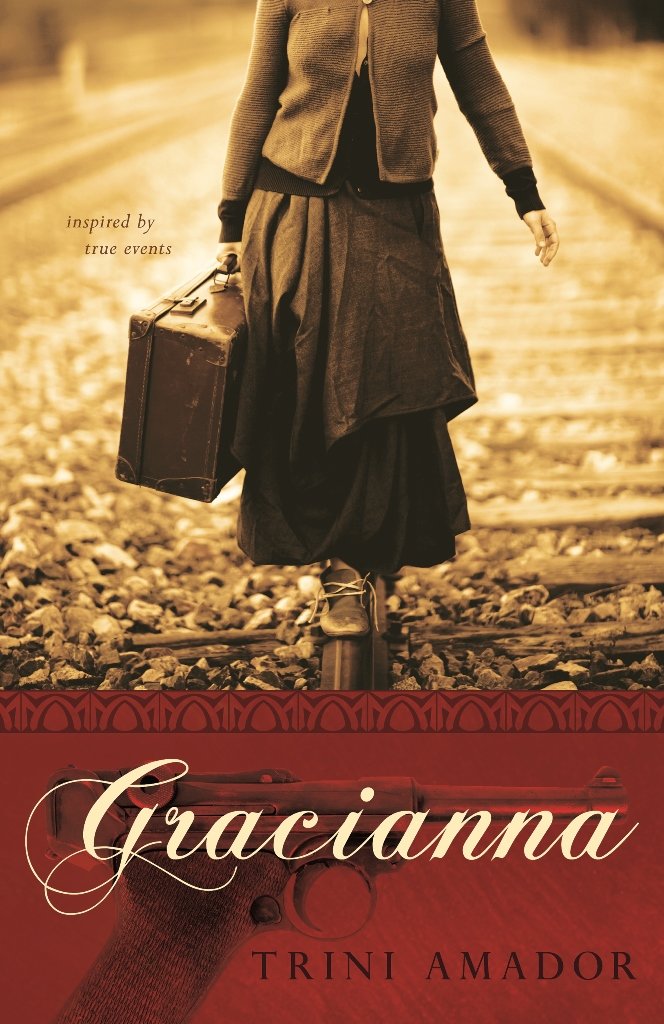 Gracianna by Trini Amador is an amazing story of courage, loyalty, and love and is made all the more intriguing in that it is inspired by actual events in the life of Trini Amador’s great-grandmother, Gracianna Lasaga.  I was drawn to this story not only because it was inspired by a real life person but also because of the subject matter.  The novel takes place at the beginning of World War II when Paris fell to German occupation forces.  The whole story though begins with Trini Amador finding a loaded German Luger in his great-grandmother’s nightstand when he was only a boy of four.  Yet this memory haunted him throughout the years until he knew that he just had to uncover the story behind the gun.  In Gracianna he weaves fact with what he imagines was the story of his great-grandmother.

Gracianna is a French-Basque girl who grew up in the Pyrenees Mountains but had longed to leave them since she was a young girl.  Her dream was to make it to America one day.  Gracianna never had a really easy life having lost her mother at a young age and is then brought up by her strict grandmother but above all she was taught to take pride in what she did and what she believed in.  Finally she decides that it’s time to leave and she heads to Paris and gets a job in a restaurant.  Gracianna is amazed by all Paris has to offer and she loves it but after the Germans invade life takes a dramatically different turn for her.

It’s not long before Juan, a man who has loved her for what seems forever shows up in Paris as well and is determined to stay with her there but it seems they both want very different things.  With the war raging around her Gracianna learns that her sister had been arrested and taken to an Auschwitz camp as a laborer.  She vows that she will get her sister out no matter what she has to do to achieve it.  As things escalate in Paris, Gracianna who has a very unique look is quickly recruited by the Resistance to perform certain tasks for them.  She is at turns horrified and feels justified in what she’s doing in the name of the war but ultimately she has her eye on the one man who can help her rescue her sister from the death camp she is in.

This is a fast paced story that I was completely drawn into.  Knowing that it is based on true events had my imagination going in overdrive.  I enjoyed the story of Gracianna but I was also drawn to the story of her sister Constance in the concentration camp and how she managed to survive being there.  Gracianna is a story of true courage and determination and shows the lengths that people will go to for what they believe in and to protect those they love.  It is well worth reading!

Gracianna by Trini Amador is touring with Historical Fiction Virtual Book Tours and I’m the first stop so be sure to pop in and check out all the other tour stops.  You can learn more at the Gracianna website as well as liking Gracianna Winery on Facebook or following them on Twitter.  Your own copy of Gracianna can be purchased at Amazon or Amazon Canada.

Source:  Review copy provided by Historical Fiction Virtual Book Tours and the Publisher via NetGalley.  No compensation was received and all opinions are my own.