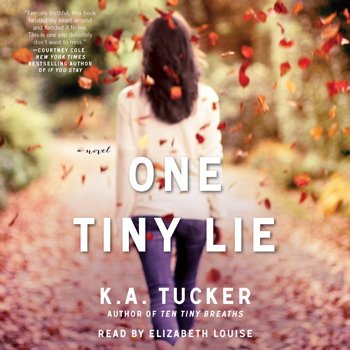 One Tiny Lie by K.A. Tucker is the sequel to a book I recently listened to called Ten Tiny Breaths and really enjoyed as I did this one. This one is also narrated by the wonderful Elizabeth Louise. I enjoy the tone of her voice and I just find her so easy to listen to. One Tiny Lie is considered a follow up to the first novel but it easily stands on its own although I do recommend reading the first one to get the full background story.

One Tiny Lie focuses this time on Livie, Kacey’s younger sister. Livie is now old enough to be heading off to Princeton. Since the horrific death of her parents Livie has wanted nothing more than to fulfil the promise she made to her dad to make him proud. Plus her dad attended Princeton and that makes it even more important for her to go there as well.

Livie has definite goals to go to medical school and she isn’t going to let anything get in her way. However I don’t think she was entirely prepared for how different life was going to be in college. First of all Livie has never been a party girl like her sister. She’s always been the quiet, smart, and reasonable one. College is a whole new ball game with drinking, parties, and guys.

Well one guy in particular, Ashton, who she meets on the night she gets drunk for the first time. Ashton is that classic bad boy that all the girls seem to be attracted to even though they know they should stay away from him. Not to mention that Livie has met a really nice guy in Connor who treats her good. Yet she just can’t get Ashton out of her head. As Livie’s grades begin to take a beating along with her heart she also begins to start doubting her choices for her future.

One Tiny Lie is the story of Livie trying to find out just who she is and what she really wants for her life. Heading to college opens up a whole new world to her and like many of us when we were young we immerse ourselves in it and it doesn’t always turn out for the best but Livie needs to experience it all in order to truly know who she is. Being much older than Livie I could still identify with her by remembering my younger and much wilder days. I didn’t always like her decisions or the things she was doing but I had to step back and look at it from the perspective of an eighteen year old and then it made more sense.

I enjoyed listening to One Tiny Lie as I’ve kind of become attached to Livie and Kacey now. Their story and the hardships they’ve endured grab your heart and make you care.  As a note there is language and sexual scenes that some may not like but nothing overwhelming or vulgar. As for the audio production I thought it was excellent and I really feel that Elizabeth Louise adds to the story with her various tones and easy story telling.

Source:  Review copy provided by Simon & Schuster.  No compensation was received and all opinions are my own.