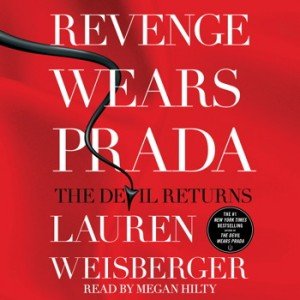 I loved The Devil Wears Prada – both the book and the movie which I’ve watched more times than I can count so I was over the moon excited to listen to Revenge Wears Prada: The Devil Returns by Lauren Weisberger. It’s narrated by Megan Hilty who I’ve never listened to before but I thought she did a great job portraying the characters in the book. She even did the famous words ‘that’s all’ of Miranda’s really well and made me laugh. Revenge Wears Prada is a book meant solely to entertain and on that it most surely delivers!

If you’ve read the first book you know how it ends with Andy saying some choice words and leaving Miranda in Paris in the middle of fashion week. Well now it’s almost a decade later and she’s left the horror of working for Miranda and Runway magazine far behind. As a matter of a fact she is now running her own very successful high-fashion bridal magazine called The Plunge with non other than Emily – her long lost ex-assistant from her days working for Miranda and she loves it. Even her love life is going well and she’s married to Max who comes from a wealthy society family and they have a baby daughter.

Yet believe it or not Miranda still haunts Andy especially in her dreams which are actually nightmares when you come down to it. To top it off because The Plunge is so successful and is beginning to garner even more attention the girls are now running into Miranda at social functions and at times Andy finds herself thinking that Miranda almost seems like normal person. When an offer for The Plunge comes and Miranda starts throwing her weight around again Andy knows she doesn’t want it to get into Miranda’s hands. However Andy could never predict what the people closest to her will do to get what they want even if it destroys her.

I really enjoyed the audiobook version of Revenge Wears Prada. It was well done and I felt as though I was watching the sequel to the first book in the way that the narrator brought the story to life. My only issue with the book was the whole bit with Andy being pregnant. I just felt too much time was spent on it because I was looking for more of the rivalry between Miranda and the girls than that. Did I like it as much as The Devil Wears Prada – no I can’t say that I did but I can say that Revenge Wears Prada is a good, solid sequel to the first one and will ultimately make another great movie.

For summer reading or listening at the beach or on your favorite swing in the backyard pick up a copy of Revenge Wears Prada by Lauren Weisberger – it’s entertaining and the perfect escape from life for a while!

Source:  Review copy provided by the Publisher.  No compensation was received and all opinions are my own.