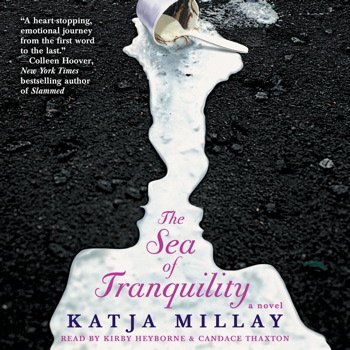 There is a reason that The Sea of Tranquility by Katja Millay has over 600 five star reviews on Amazon. It is such a good book and the audiobook version is beyond awesome! The Sea of Tranquility is a heart breaking and yet hopeful novel narrated by Candace Thaxton and Kirby Heyborne and they do beyond a fantastic job of portraying the deep emotions of this book. I have listened to one other audio by Kirby Heyborne before and I love the tone of his voice and he does a great job of really putting feeling into his character’s voices. I have listened to a few audios now by Candace Thaxton and I think she has a wonderful voice that I could listen to forever.

Nastya Kashnikov is a girl who lives in a very silent world because she refuses to speak. It’s two and a half years after a horrific tragedy took away the person she once knew herself to be and that person had everything to live for being a promising piano prodigy. This person doesn’t have much to live for and she wants the person who took everything away from her to pay one day. Unable to stay at home she moves in with her aunt in the hopes of being able to get through high school without anybody ever learning what had happened to her that dark day her shining light went out.

Nastya stands out when she arrives at school because she goes to great lengths to make herself look a little scary with dark make up and clothes. She doesn’t want to make friends … until she sees Josh Bennett who seems as lost as she is. Josh has his own sad story to contend with having lost everyone he loves and he’s quite happy being a loner without any attachments. Yet when Nastya keeps showing up in his garage while he’s working and just silently watching him he begins to want to know her story. Josh knows there is more to her than meets the eye … he knows that she keeps the secrets of her past to herself but will he ever truly be able to know her or love her without knowing them himself?

The Sea of Tranquility is an emotionally intense story that keeps you flipping pages as you continue to uncover Nastya’s past. Both Nastya and Josh were great characters. Nastya is such a fragile and broken soul that your heart goes out to her and Josh too is broken and that is the initial attraction between the two. The question is can two broken souls come together and begin to heal each other?

The Sea of Tranquility by Katja Millay takes you on an emotional journey throughout. The characters within the pages of this book grab your heart and don’t let go. What shines through the sadness and despair is the hope of a new tomorrow. I loved this book and I’m sure that it’s in part to the wonderful narration because I felt that listening to it really brought this story alive for me. The Sea of Tranquility comes highly recommended and one it’s one of my favorite audios of the year!

Source: Review copy provided by Simon & Schuster. No compensation was received and all opinions are my own.