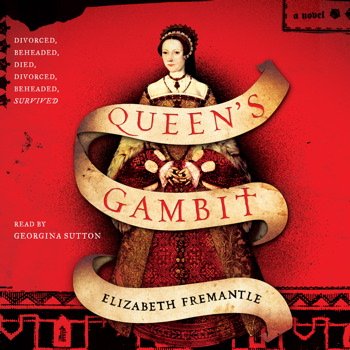 Secrets, betrayals, and power…this is what you will find in the debut novel of Elizabeth Fremantle. Queen’s Gambit is the perfect blend of historical fact and fiction giving the reader an inside look into the life of the sixth wife of Henry VIII, Katherine Parr. As she is one of the lesser known wives of Henry VIII I appreciated the rich detail and imaginative storyline that went along with breathing life into her character. I listened to the audiobook of Queen’s Gambit which is narrated by Georgina Sutton and she is wonderful. She has the perfect voice for historical fiction and she brought Tudor England alive for me in a most vivid way!

The novel opens with Katherine Parr being widowed for the second time. Then she is called back to court and the rumors start flying that the king is looking to marry her. Katherine can’t imagine what the king would want from her as she’s over thirty now and even more than that she is in love with another man… Thomas Seymour. Yet we all know you can’t say no to a king and it isn’t long before Katherine is married to the king and unfortunately for her he is ailing, miserable, and very drunk on his own power at this point in his life.

Thus begins Katherine’s struggle to just stay alive given the fate of two other of Henry’s wives being executed. It’s a constant battle to stay in the king’s favor and do nothing to disappoint him and therefore incur his wrath. Katherine is intelligent though and uses all she has in her power as a woman and otherwise to ensure her survival at court and in her marriage to Henry. One thing she never gives up on is her love for Thomas Seymour but one has to wonder if that was ever really meant to be…

I really enjoyed this novel. It was told through Katherine’s viewpoint and that of her servant Dot. I found Dot’s story interesting in that we saw the court and its goings on through the eyes of a servant. I also appreciated her loyalty and desire to better herself despite her station in life. I can’t imagine what it would have been like to live in a time when a woman could be ordered to marry whether she wanted to not or to live in fear for your life and on guard all the time as nobody could be trusted. One has to admire Katherine Parr for having survived at all.

Having read quite a bit of Tudor history by now you won’t find anything new in the facts of the novel but it is the talent of the author’s imaginative mind that breathes life into Katherine Parr and makes the Queen’s Gambit stand out as a wonderful piece of historical fiction! I recommend this one to historical fiction fans and if you have the chance to listen to the audio production please do as it’s beautifully done!

Queen’s Gambit by Elizabeth Fremantle is touring with Historical Fiction Virtual Book Tours so be sure to check in on her other tour stops. You can connect with Elizabeth on her website, Facebook, Twitter, and Goodreads.

GIVEAWAY DETAILS (US Only)- Paper Copy Only

I have two copies of Queen’s Gambit by Elizabeth Fremantle (paper copy only) up for giveaway. To enter…

This giveaway is open to US residents only (no PO boxes) and I will draw for the winners on September 8/13.  Good luck!