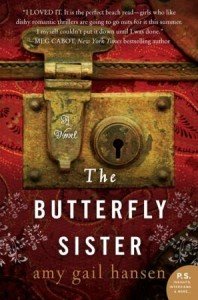 The Butterfly Sister is the debut novel of Amy Gail Hansen and it is a haunting novel that touches on love, deceit, madness, and revenge with an added element of mystery. I really enjoyed this novel and while I had uncovered some of the mystery I was ultimately surprised by what ended up transpiring. I listened to the audiobook version of The Butterfly Sister which was narrated by Amy Rubinate and she does a wonderful job. I have listened to her narration before and enjoyed it and she’s becoming one of my favorites. I think she adds a lot to the depth of a character and story with the way she portrays it.

When Ruby first goes to college she seems to have the world at her fingertips. She’s happy, carefree, smart, and enjoying college and her friends. Then Mark, her professor, starts to pay her a little extra attention and she’s thrilled. After all he’s got all the girls at the college crazy about him. Obviously Mark is a jerk and ultimately he does her more harm than good throwing her headlong into a suicide attempt and deep depression. She leaves college without her degree and without any intentions of ever returning.

Yet when a suitcase is delivered to her – one she had borrowed from Beth when she was still at the college she is stumped. Why is the tag with her name still on it? Even more there is a journal inside that leads Ruby to believe that Beth was also having an affair with Mark. Nothing though prepares Ruby for the shock she receives when she phones Beth’s mother only to find that Beth is missing and it’s considered suspicious. Ruby decides to go back to the college to try and fix how she left things and also to try to uncover what’s happened to Beth but more if it had anything to do with her affair with Mark.

All this seems fairly straight forward but it’s anything but because there are the underlying themes of depression and craziness along with a good dose of literary references that kept me glued to this audio. As Ruby takes us back in time to how her suicide attempt came about we also see odd ghostly sightings she has and other things that lead her to believe she’s losing her mind. As well Ruby is fascinated with authors who have struggled with depression and she makes reference to the link between being creative and depression quite often.

I appreciated how the author dealt with the subject of depression and how quite often young people are led astray and unable to handle the aftermath in a productive way. Some have had issues with the later half of the novel dealing with the mystery aspect but I thought it was really interesting how the author wove the literary feel of the novel with the mystery and tied the elements together. All in all The Butterfly Sister was a novel I really enjoyed and I look forward to more from this author.

The Butterfly Sister by Amy Gail Hansen is touring with TLC Book Tours so be sure to check out the other tour stops.  You can connect with Amy on her website and Facebook page.  Your own copy of The Butterfly Sister can be purchased at Amazon and Amazon Canada.

Source:  Review copy provided by TLC Book Tours and the publisher.  Audiobook copy is my own personal copy.  No compensation was received for this review and all opinions are my own.